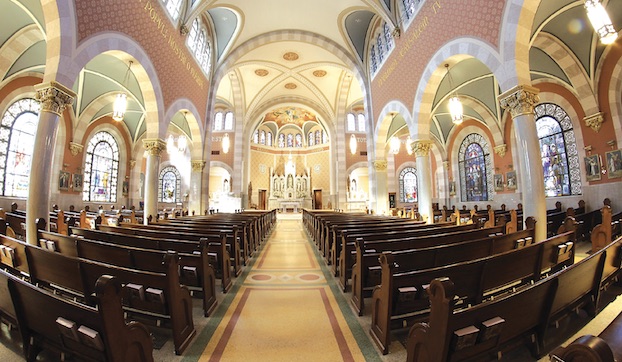 Attendees of the 81st performance of George Frideric Handel’s “Messiah” are in for an “acoustically alive” concert when singers take the stage Dec. 4  in a new location — the recently renovated Cathedral of the Immaculate Conception.

The Cathedral was built in 1913 after the original church was destroyed in the Great Fire of 1910. Stained glass was added in the 1930s.

A renovation in the 1940s, however, changed everything.

“Monsignor Boudreaux was pastor in the 1940s and he really was ahead of his time,” said Robert Marcantel, director of music for the parish. “He would invest in recording equipment and as a result we have some early recordings of the cathedral choir. He really liked music.”

One of the things Boudreaux didn’t care for, according to Marcantel, was the reverberation time when the choir performed.

“So he put this acoustical tile up that was made to look like stone,” Marcantel said. “From the 1940s until the 2010s, that tile stayed up there.”

“One of the first things they did when the very early stages of the Cathedral restoration began was to tear down all those acoustical tiles because they realized it was made of asbestos and moisture had gotten in back of them. What happened was when they took all the tiles down, all of the sudden the acoustics drastically changed.”

Marcantel said once the restoration was complete, the decision was also made to not reinstall cushions on the wooden pews.

“The pews are hardwood finished, there’s terrazzo floor, then a marble extension was added to the front of the front altar area, so now you have all these reflective surfaces — marble, wood, terrazzo tile — and now if the cathedral is empty there is a six-to-seven minute delay when you finish singing or playing an instrument.”

“It’s really, really crazy,” he said with a laugh.

Marcantel said “Messiah” director Colette Bulber Tanner has sung in the cathedral when it has been empty and “it was like I could hear the sound traveling toward me like waves of an ocean.”

“When that sound hit me, it washed over me and I got major, major chills,” he said. “I’ve never experienced anything like that before.”

Marcantel said without the tiles, the building is extremely reverberant now — something that was missing for nearly 70 years.

Also of note, is the fact that Francis G. Bulber — Colette’s father and founder of the beloved performance — was the parish’s choir director at one time.

“He was a wonderful, wonderful man; a gentle soul,” Marcantel said. “I think it’s appropriate to have ‘Messiah’ play here for the first time because of that connection.

Marcantel said ‘Messiah’ was performed for the first time in a building in Dublin, Ireland, that was about the same size as the cathedral.