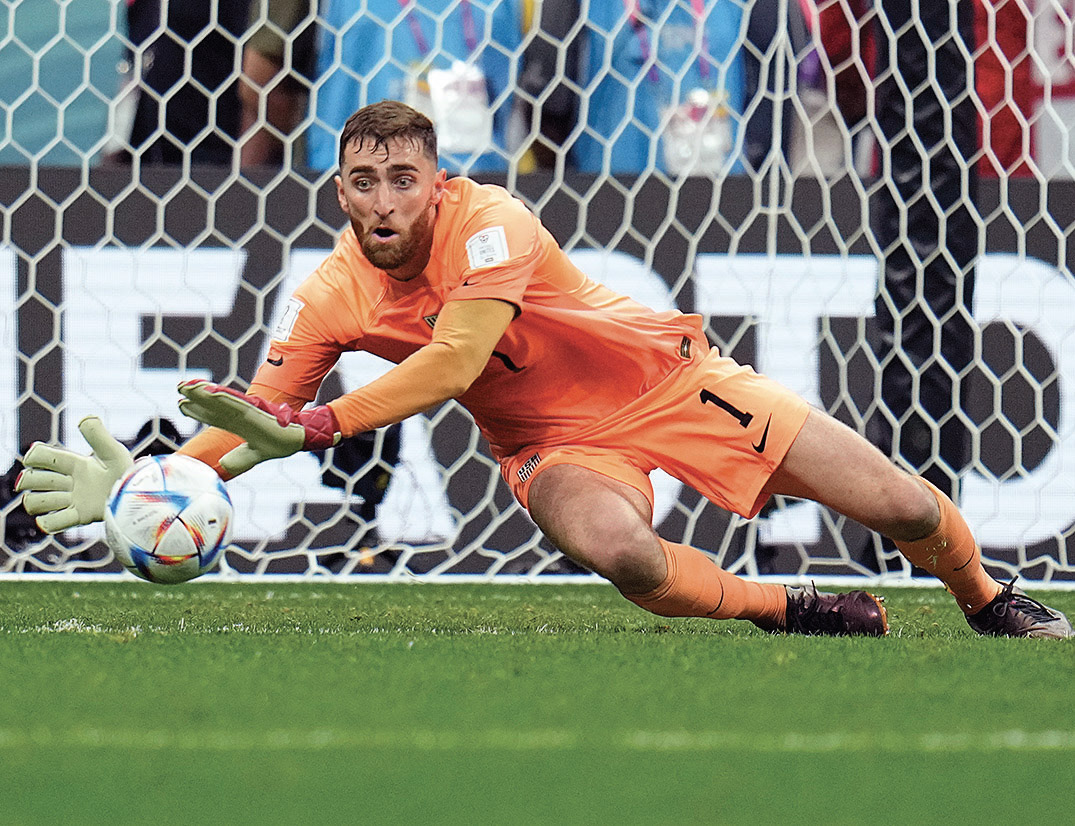 Goalkeeper Matt Turner of the United States makes a save on a shot by England’s Mason Mount during a World Cup Group B match Friday at the Al Bayt Stadium in Al Khor , Qatar. (Associated Press)

AL KHOR, Qatar — Loud jeers rang around the stadium. England’s fans were not happy. The United States had frustrated them yet again at a World Cup.

That’s three times and counting that the teams have met on soccer’s biggest stage and England is still waiting for its first win against the Americans after a 0-0 draw on Friday.

Coach Gareth Southgate had reminded his players of that record beforehand, with the U.S. famously winning 1-0 in 1950 and playing out a 1-1 draw in 2010. They didn’t seem to heed his warning and didn’t respond to Gregg Berhalter’s young and energetic team.

England beat Iran 6-2 in its opening game in Qatar to justify its status as one of the tournament favorites. But it could consider itself fortunate not to have dropped another match to the U.S., after Christian Pulisic hit the crossbar with a first-half strike and Weston McKinnie lifted a shot over from 8 yards out.

The England fans had turned up at the Al Bayt Stadium in anticipation of celebrating a win and qualification to the knockout stages with a game to play.

“I want our fans at home to have a smile on their faces and we haven’t quite managed to achieve that,” Southgate said. “But people are going to react how they react and I can’t let that affect how I feel about the team or how the team feels.

“The objective is to qualify and we have three games to do it.”

Frustrating England is one thing. But Berhalter’s job is to advance to the knockout stages.

The draw sets up a match for the U.S. against Iran on Tuesday for a spot in the round of 16. Iran beat Wales 2-0 earlier and sits second in Group B with three points, one more than the Americans.

“It sets up our first knockout game of the World Cup,” Berhalter said. “We win or we’re out of the World Cup. That’s going to be the focus for us while we are preparing the team for the next game.

“But most importantly, understanding the intensity Iran is going to bring. They played an excellent game today. Played with ton of spirit will have to be up for it if we want a chance to advance.”

Southgate, meanwhile, will try to lift his players. He described them as dejected following the elating win against Iran.

And despite the boos, England is still top of the group with four points.

“It wasn’t the best performance, for sure,” said Harry Kane, who came close to scoring with a stoppage-time header. “Good spells with the ball, but we didn’t quite have the final product.

“We had two or three opportunities and didn’t put it away.”

Kane, Golden Boot winner from the 2018 World Cup, is still looking for his first goal at this tournament.

Yunus Musah, who chose to represent the U.S. over England, showed exactly what Southgate is missing out on with a dominant midfield performance.