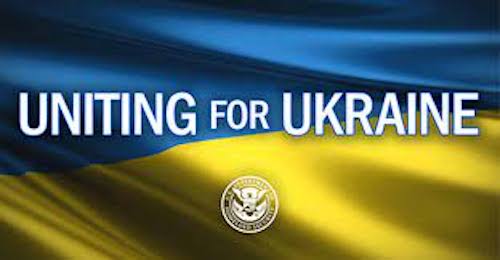 The United States and its allies have been doing a great job helping Ukraine defend its country against Russian invasion, but there is some hesitancy to keep doing it. Here is the background (Photo courtesy of the United States Citizenship and Immigration Services).

The unholy war being waged in Ukraine by Vladimir Putin has troubled me since the first day the Russian president launched the invasion of the country that was formerly part of the Soviet Union. How could it happen, I wondered, and no one trying to stop it?

The risks were too great, of course, but President Joe Biden, Congress, and American allies stepped up to provide Ukraine with financial aid and the weapons it needs to defend its country. Then came comments by Republican U.S. Rep. Kevin McCarthy before the Nov. 8 midterm elections that were extremely disturbing.

McCarthy, who is expected to become speaker of the House, warned that Republicans wouldn’t support writing a “blank check” for Ukraine if the GOP captured the majority. The GOP didn’t get control of the Senate in the election, but they were only one seat short Wednesday of the 218 they need to control of the House.

Democratic Sen. Chris Coons of Delaware had some comforting words when he said, “I am confident that bipartisan robust American support for the fight of the Ukrainian people will continue in Congress. The United States has long been a nation that fights for freedom, and this is the most important fight for freedom in the world today.”

It comes as no surprise that Republicans on the far right, particularly those aligned with former President Donald Trump, take a different view. Rep. Marjorie Taylor Greene, for example, a member of the ultra-right conservative Freedom Caucus, told a rally of Trump supporters in Iowa that “under Republicans, not another penny will go to Ukraine.”

J.D. Vance, who won an Ohio Senate seat and who was put in the race by Trump, campaigned on ending financial support for the country. He said Congress has “got to stop the money spigot to Ukraine eventually.”

The AP said McCarthy seemed to be giving a nod to those skeptics with his comments before the election. He said, “I think people are gonna be sitting in a recession and they’re not going to write a blank check to Ukraine. They just won’t do it … It’s not a free blank check.”

McCarthy walked back those comments later, telling CNN he’s very supportive of Ukraine but thinks there should be “accountability going forward.” Biden said that accountability is already there and the U.S. hasn’t given Ukraine a blank check. “There’s a lot of things that Ukraine wants we didn’t — we didn’t do,” he said.

AP VoteCast, a nationwide survey of more than 94,000 voters, found about 4 in 10 say the aid to Ukraine was about right and 3 in 10 said it should be more active. The other 3 in 10 wanted the U.S. to provide less to Ukraine.

Ukraine’s defense minister said he didn’t anticipate American support would erode. Its trade and economic development minister said it understands “that one day we should rely very well on ourselves again.”

We can only hope that help for Ukraine from this country and from our allies remains strong. It’s the only way to stop the devastating death and destruction the Russian army has caused in Ukraine. Their war crimes are unimaginable.

Ukraine was on my mind again Sunday as we sang the closing hymn at our church service. “This Is My Song” was written by Lloyd Stone and Georgia Harkness. It tells “O God of all the nations,” it is “a song of peace for lands afar and mine.”

“This is my home, the country where my heart is; here are my hopes, my dreams, my holy shrine: but other hearts in other lands are beating with hopes and dreams as true and high as mine.”

The third stanza says, “May truth and freedom come to every nation; may peace abound where strife has raged so long; that each may seek to love and build together, a world united, righting every wrong; a world united in its love for freedom, proclaiming peace together in one song.”

Ukraine is fighting to regain the freedom it first gained on Aug. 24, 1991, when it became independent. One news report probably explained why Putin wants the country back. “With Ukraine,” it said, “Russia is an empire. Without it, Russia is just another country.”