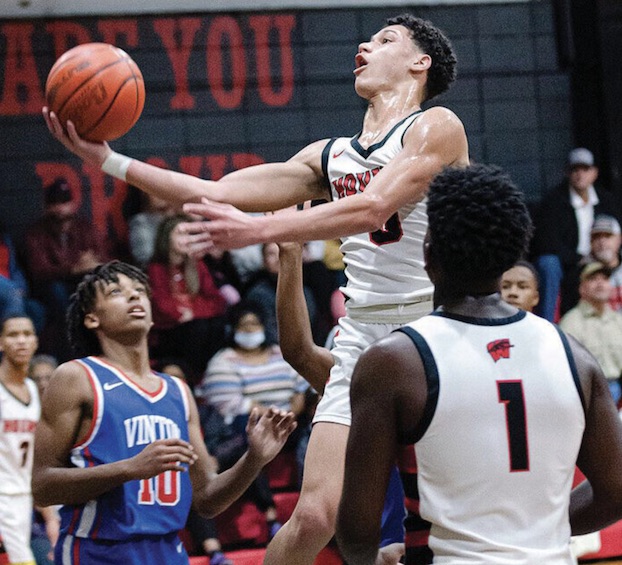 The Greyhounds’ Jonavon Begnaud drives to the lane against Vinton during a District 5-2A game Friday night in Welsh. (Rodrick Anderson / American Press)

WELSH — Welsh built a huge lead in the third quarter but had to fend off a late Vinton rally to retain the top spot in District 5-2A on Friday with a 65-61 win.

“They are a good team and were able to scratch back,” Welsh head coach Caleb Gary said of the Lions. “We were able to get the win at the end, and I am proud of my guys.”

“It goes back to our offense,” Gary said. “We preach every day to share the ball and move the ball as a team.”

Vinton (13-7, 2-2) got within three points three times in the final 2:22, twice on 3-pointers by Keithan Rigmaiden and on a layup by Levias, who led the Lions with 22 points, and Rigmaiden finished with 19.

Welsh committed five turnovers in the fourth quarter, but Pattum iced the win with a pair of free throws with 3 seconds left.

“We talk about it all the time — turnovers,” Gary said. “It kills us. We have to take care of the ball to be a good team.”

Up four points early in the third quarter, Welsh went on a 15-2 run to build its big lead.

“I thought we got in a rhythm,” Gary said. “We started shooting the ball better, moving the ball on offense and creating better shots.

“We were taking a lot of bad shots in the first quarter. Our defense started to get better, and we started getting better.”

Vinton started the night as one of three teams tied for second in the district along with Lake Arthur and Notre Dame. Vinton led 8-2 with 5:12 left in the first quarter after one of Rigmaiden’s six 3-pointers. The Lions lead got up to 15-7, but Welsh took the lead, 17-15, for good on a 3-pointer by Soulaire with 7:37 left in the second quarter.