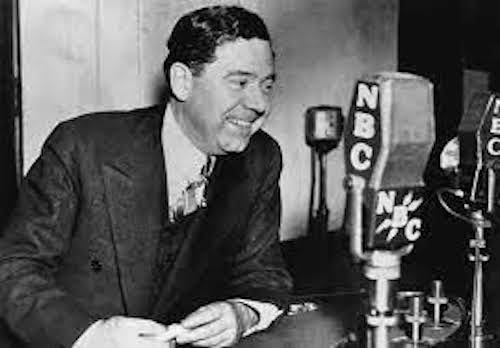 Huey Long made his "Every Man a King" promise during a 1934 broadcast over NBC.(Photo courtesy of ThoughtCo).

While Huey Long was a U.S. senator who had strong control over the Louisiana Legislature in 1934, he and former President Donald Trump had a lot in common. Long was talking that year about running for president on a third-party ticket in 1936.

Unfortunately for Long, he was either assassinated in 1935 or mistakenly killed by his bodyguards. Conspiracy theorists have debated that issue since 1935, so take your pick on which story you believe.

Unlike Trump, who didn’t work his way up the political ladder to the presidency, Long served his time in three major jobs. He was elected to the Louisiana Railroad Commission in 1918, which eventually became the Louisiana Public Service Commission.

The commission in those early years became a stepping stone to the governor’s office, and it was no surprise that Long got involved in the 1920 gubernatorial election. He campaigned for John M. Parker, who served from 1920 to 1924.

Long announced in 1923 that he was going to run for governor in 1924. He was a tough campaigner and carried 28 parishes with 31 percent of the vote but finished in third place. Henry L. Fuqua was elected but died in office in 1926. Lt. Gov. Oramel H. Simpson became governor.

The next four years were spent by Long building up his reputation and his political organization. In the 1928 election, Long polled 126,842 votes to 81,747 for Riley Joe Wilson and 80,326 for Simpson. Long’s margin was the largest in state history.

No one wanted to face him in a runoff, so Long became the Democratic nominee for governor in 1928. He defeated the Republican nominee with 96.1 percent of the vote. Long was 35, the youngest person ever elected governor of Louisiana.

To say Long’s tenure as governor was controversial would be an understatement. He was impeached by the House on 8 of 19 charges, but the Senate failed to convict him.

In 1930, Long, who by that time had been called “The Kingfish,” decided to run for the U.S. Senate. His opponent was incumbent Sen. Joseph E. Ransdell, whom Long had endorsed in 1924. Long defeated Ransdell with 57.3 percent of the vote.

Long then became both governor and senator-elect. The Associated Press said his control over the state Legislature “made him a complete political dictator in the state.” His homestead amendment that almost wiped out property taxes was one of 14 approved by legislators and voters in 1934.

“’King’ Huey Long of the new “country’ of Louisiana bubbled with enthusiasm today over the Utopia he says he is setting up in the United States,” The AP said.

Long said his amendments “shift the burden of taxation from the little man who can’t afford to pay it to the big man who can pay it and never know a thing about it.”

It was at that point that Long began to sound an awful lot like Trump who keeps promising to “Make America Great Again.” Long hadn’t made an announcement for president, but The AP said in conversation his plan was to run and make a “Utopia” of Louisiana and then promise something of the sort to the nation as a third-party candidate.

“Every Man a King” was a speech Long broadcast on NBC on Feb. 23, 1934, that advocated a more equitable distribution of wealth. It ended by asking his listeners to “help in our Share Our Wealth Society.”

The AP said even Long’s enemies in 1934 said he couldn’t be taken lightly. The headline on a Rich Lowry column in The Advocate Tuesday said, “Don’t Count Donald Trump Out.”

Long had made a national name for himself when he campaigned for and was credited with helping Mrs. Hattie Caraway be elected a U.S. senator from Arkansas. Long had already started his “share-the-wealth” clubs throughout the country, which could be turned into political organizations overnight.

The AP said Long was “not the same blustery, officious, crude man he was in many battles to rip and tear his opposition to pieces in Louisiana, but he does occasionally slip back into his old habits.”

Long said, “First, we’re going to make Louisiana a ‘Utopia,’ the kind of a state nobody has dreamed of. Then, we’ll use Louisiana as a pattern.”

Sounds awfully similar to what we’ve been hearing from Trump in recent years.