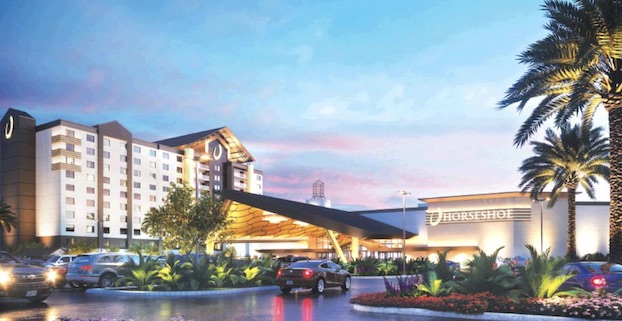 An architectural rendering of the exterior of the new Horseshoe Casino. (Special to the American Press)

At the Monday Westlake City Council meeting, a measure was introduced that will prevent the city from using revenue from the Horseshoe Casino for payment of new debt or recurring expenses and Isle of Capri Boulevard will soon become Horseshoe Casino Boulevard.

Tuesday, Dec. 13, 5 p.m. to 7 p.m. at the Pryce Miller Recreation Center, 216 Albert St., Lake Charles, the public is invited to view project information and ask questions about the new bridge. Comments will be accepted during the open house at the comment station.

Following the open house portion, a moderated session will be held from 6:30 p.m. to 7 p.m. for those wishing to provide oral statements to the project team and those in attendance. The Draft Environmental Impact Statement (EIS) for the project is available for review at the LADOTD District Office in Lake Charles, local libraries in Lake Charles, Westlake and Sulphur and online at www.i10lakeharles.com. The EIS will also be available for review at the public hearing.

“I think it’s very important that Westlake is represented, really anyone who uses this bridge should show up for this meeting,” said Vernon Meyer, Westlake’s engineering consultant.

Meyer said that according to Shawn Wilson, Secretary of the Louisiana Department of Transportation and Development, this EIS has been 22 years in the making and the last thing to do before they start the actual design-build criteria.

Guillory said the project studied the effect of light on plants for the purpose of growing more food for an increasing population using less land in artificial environments.

“We set the photo (light) period at six, 12 and 18 hours,’’ Guillory said. “Everything else, soil and moisture, was kept consistent. We found the most edible plant mass was produced in plants that received six hours of light. Plants receiving 18 hours of light had the least edible mass, not what we expected.”

It might be the end of the year, but the Westlake Fire Department isn’t sloughing off, according to Chief Jonathan Duff. Westlake firefighters can now help make sure infant and toddler seats are installed and used correctly in vehicles. They can give out fentanyl test strips and Narcan, an opioid overdose treatment. Firefighters Dalton Bushnell and John LaVergne received EMT training and were presented their first patches from Interim Mayor Dan Racca.