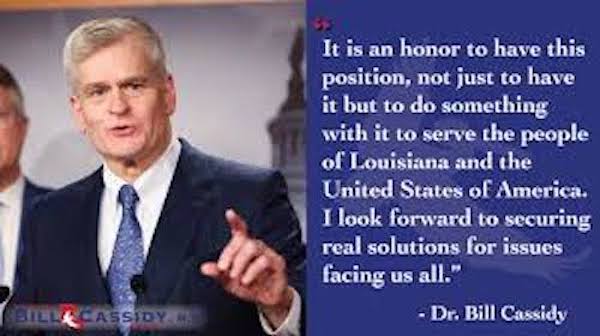 Republican U.S. Sen. Bill Cassidy has served Louisiana well in the Senate and he has decided not to run for governor, which is a wise decision. (Photo courtesy of Twitter).

U.S. Sen. Bill Cassidy, R-Baton Rouge, made a wise decision when he announced he wasn’t running for governor in 2023. Cassidy has chalked up some major accomplishments for Louisiana in Congress and he can do much more.

Cassidy’s decision opens the door for Republican U.S. Sen. John Kennedy to run for governor and some Louisiana political analysts believe he will do it.

Louisiana is benefiting handsomely from the bipartisan Infrastructure Investment and Jobs Act (IIJA), and Cassidy played a lead role in getting that bill passed through a tough Congress. He was a lead author and vocal champion of the legislation that is expected to eventually get a minimum of $7.2 billion for Louisiana’s roads, bridges, public transit, airports, broadband improvements, water system upgrades, and more.

“For the last several years, I have been working on specific legislation that is critical for the future of our state and country,” Cassidy said in a statement released Friday morning. “ … I have chosen to remain focused on the job I was sent here to do and to see these efforts through …”

The Senate had earlier approved the bill with a 60-30 vote. Cassidy was for it, but Kennedy was opposed.

Cassidy’s work on the infrastructure bill demonstrates his willingness to work with Democrats to get things done. He became the ranking Republican member Thursday on the powerful Senate Committee on Health, Education, Labor, and Pensions.

Cassidy is a graduate of LSU and the LSU School of Medicine. He is a gastroenterologist and has treated diseases of the liver at the Earl K. Long Medical Center in Baton Rouge. In 1998, he helped organize the Greater Baton Rouge Community Clinic to provide uninsured residents with access to free health care.

When supporters of former President Donald Trump stormed the U.S. Capitol on Jan. 6, 2021, Cassidy was with other members of Congress getting ready to certify the election of Democratic President Joe Biden. He tweeted that the insurgents were hooligans, the storming was un-American, and the participants were guilty of sedition.

Cassidy on Feb. 9, 2021, voted that Trump’s impeachment trial was unconstitutional. However, when the Senate voted it was constitutional, Cassidy was one of seven Republicans to vote to convict Trump of inciting insurrection. The senator was censured by the Louisiana Republican Party.

Kennedy has $15 million in campaign funds available for use by a political action group in a gubernatorial race.

“I’ve spent my life and career serving the people of Louisiana,” Kennedy said in a statement. “Becky and I raised our family here and are so proud to call it home. But we can’t deny that our great state is facing serious challenges. To meet those challenges, Louisiana families deserve a governor who can lead our state and help solve our toughest problems.”

Those comments certainly sound like he is running for governor. However, the state isn’t in as bad a shape as Kennedy would like us to believe. Democratic Gov. John Bel Edwards has measured up to all the qualities of a capable leader.

Yes, the state has some problems. What state doesn’t? However, Louisiana is in much better shape financially than Edwards found it. And his West Point and U.S. Army training has helped him be effective at handling the many weather, health, and other emergencies that occurred during his administration.

If Kennedy runs, his 62 percent winning margin in his U.S. Senate race would probably discourage some of the others considering a campaign.

Republican state Attorney General Jeff Landry, who has secured his party’s endorsement, won’t be the most popular candidate in the field and Kennedy may see that as another major advantage.

We won’t know how many hopefuls there might be until they qualify from Aug. 8-10, 2023. Look for a lot to happen between now and then.