End of the road, Cowboys finish with three wins 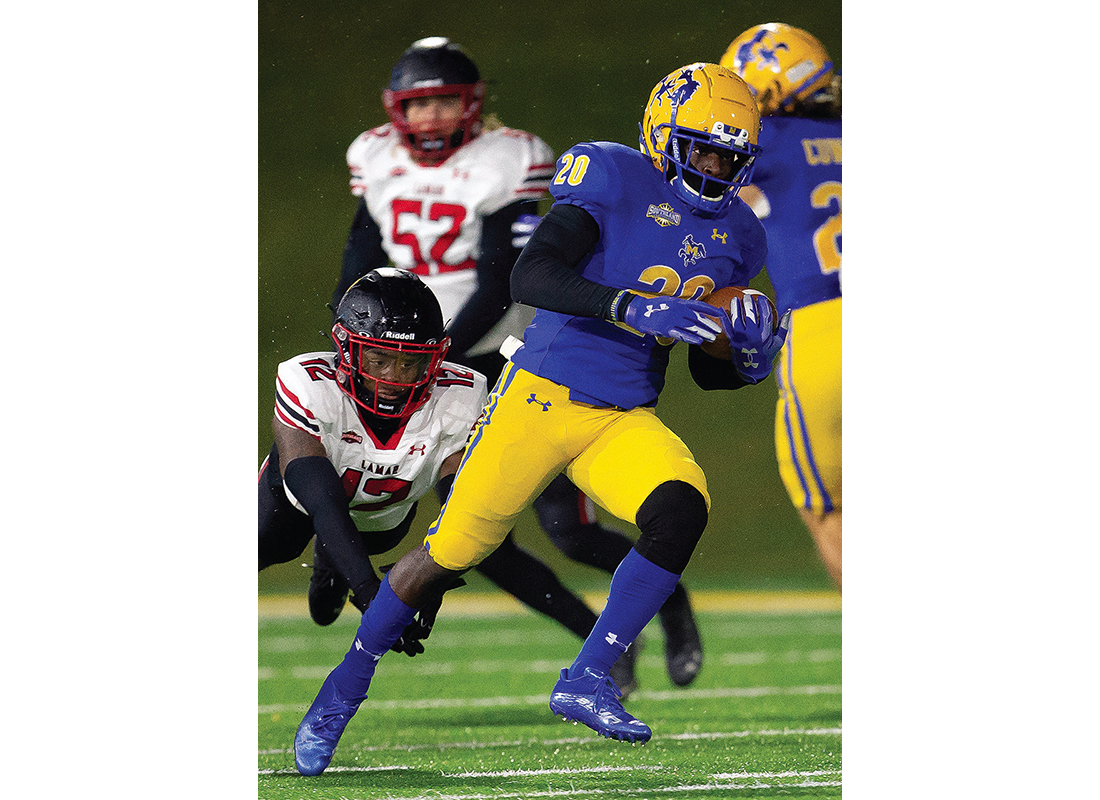 In his final game as a Cowboy, McMahon finished with a career night.

The senior running back ran for a personal-best 239 yards on 20 carries to lead McNeese State to a 24-20 victory over Lamar Saturday night at Cowboy Stadium.

McNeese (4-7, 2-4 in Southland Conference) finished the season on a three-game win streak, its first since 2019.

“This team could have thrown in the towel and it never did,” said first-year McNeese head coach Gary Goff.

McMahon was the story once again for the Cowboys offense as he scored twice on long runs in the second quarter.

His first TD run covered 79 yards and was the 10th longest in McNeese history. He followed that up moments later in the second quarter with a 70-yard run.

With those plays, McMahon became the first McNeese player to score on two runs of 70 yards or longer in one game.

“I was just trying to pick my knees up and not get caught,” McMahon said. “The O-line did the job. I just see the hole and I hit it.”

Over the three-game win streak McMahon hit the holes a lot, rushing for 647 yards and 865 over the last five, easily running away with the SLC rushing title in the process.

“He’s the conference rushing leader for a reason,” Goff said. “He is tremendous.”

McMahon’s scoring sprints came during a wild second quarter that saw the teams combine for 38 points and five TDs. The other Cowboys touchdown as a 78-yard fumble return by linebacker Micah Davey, who got the start for an injured Kordell Williams.

“The ball just flew up and hit me in my face,” said Davey, who finished with a career-high 18 tackles. “I just started to run after that and didn’t want to get caught.”

Defensive back Enos Lewis knocked the ball free from Lamar’s Izaha Jones to give the sophomore Davey a chance at his big moment.

Davey and McMahon gave McNeese a 21-17 halftime lead despite a 98-yard kick return for a score by Lamar’s Major Bowden 2:57 before half.

The teams traded field goals in the second half as the rain and chilly temperatures kept the offenses from finding any rhythm.

“What haven’t we gone through this year,” McMahon said. “Tonight it was the weather.”

McNeese threw for 46 yards as freshman quarterback Ryan Roberts struggled with the conditions in his second career start. He finished 6 of 14 with an interception.

However, finishing with the win makes an otherwise tough season, the Cowboys third consecutive losing one, seem a little less difficult.