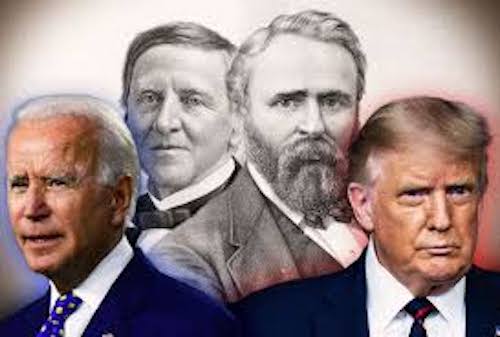 The key figures in the two most controversial elections in this country's history are, from left, Democratic President Joe Biden, Democrat Samuel Tilden, and former Republican Presidents Rutherford B. Hayes and Donald Trump. (Photo courtesy of salon.com).

Make no mistake about it. The 2020 presidential election was unlike any in this country’s 246-year history. And we hope there won’t be any more like it.  However, there have been four controversial events at other elections for president.

The first problem came in the election of 1800. John Adams and Alexander Hamilton were members of the Federalist Party. Thomas Jefferson and his lieutenants were building up the Republican Party.

Electors were selected at that time by state legislatures. Jefferson and Aaron Burr tied for first place with 73 electoral votes each.

Republicans wanted Jefferson to be president and Burr to be vice president. But the constitution said the House had to choose between the two men with each state having one vote. For 35 ballots, the House blocked Jefferson’s election.

Hamilton didn’t care for Jefferson, but he thought Burr would be a worse president. So he convinced some Federalists not to vote. Jefferson then won the election by 10 states to 4. That election forced enactment in 1804 of the 12th Amendment, which provided for electors naming the president and vice president separately on their ballots.

Rivalry between Burr and Hamilton continued for more than three years before Burr, while he was still vice president, killed Hamilton in a duel.

Four candidates were involved in the 1824 presidential election. They were John Quincy Adams, the son of John Adams, the second president, Andrew Jackson, Henry Clay, and William H. Crawford.

Jackson won the popular vote and got 99 electoral votes, 32 less than a majority; Adams, 84; Crawford, 41; and Clay, 37. The House had to again choose the winner. The 12th Amendment said it had to pick from the three highest names on the list, so Clay was out.

Clay threw his  support to Adams, who needed 13 House votes to win. He received 13, Jackson had 7, and Crawford had 4. When Adams chose Clay for his secretary of state, Jackson’s followers called it a “corrupt bargain” and Jackson resigned his seat in the Senate.

One history textbook said the claim that Jackson was “the people’s choice” in 1824 had hardly any more foundation than the charge of a “corrupt bargain.” However, Jackson began a four-year campaign to defeat Adams, and Jackson was elected president in 1828 and served two terms.

CNN in an updated story titled, “10 of the most bizarre elections in American history” called the 1876 election a “not-so-independent tiebreaker.” It featured Democrat Samuel Tilden and Republican Rutherford B. Hayes.

Tilden received a quarter-million more ballots in the popular vote, and he had 19 more votes in the Electoral College. However, Tilden was one vote away from a majority of 185 electoral votes. Twenty votes were in dispute because three states — Florida, Louisiana, and South Carolina — sent two sets of electors to Washington.

Congress created an Electoral Commission of 15 members to determine which electoral returns should be accepted. There were seven Republicans, seven Democrats and one Independent. However, the Independent selected from the five members of the Supreme Court on the commission was elected to the Senate by his Illinois legislature.

There were only Republicans left to choose from on the Supreme Court when he left. The commission then voted 8-7 to give Hayes the disputed electoral votes and he became president in 1877 for one term.

The 2000 election ended up being decided by the U.S. Supreme Court and history.com explains how that happened.

“After a wild election night on Nov. 7, 2000, during which TV networks first called the key state of Florida for Gore, then for Bush, followed by a concession by Gore that was soon rescinded, the results for who would be the nation’s 43rd president were simply too close to call,” the story said.

After 36 days, voters heard Gore had won the popular vote by 543,895 votes, but only electoral votes count. The final vote in Florida would decide the election. The Florida Supreme Court ordered a recount, but Bush appealed that to the nation’s highest court.

The Supreme Court with a 7-2 vote said the Florida recount was unconstitutional and with a 5-4 vote stopped the recount. That stopped the process with Bush ahead in Florida. With those electoral votes,  Bush had 271 votes to 266 for Gore.

That was certainly a new and controversial outcome for an election. Unfortunately, the most controversial election in history came 20 years later. We could be living for decades with the turmoil former President Donald Trump has created after he lost that one.