Blazers running on all cylinders, defense bottles up Rams 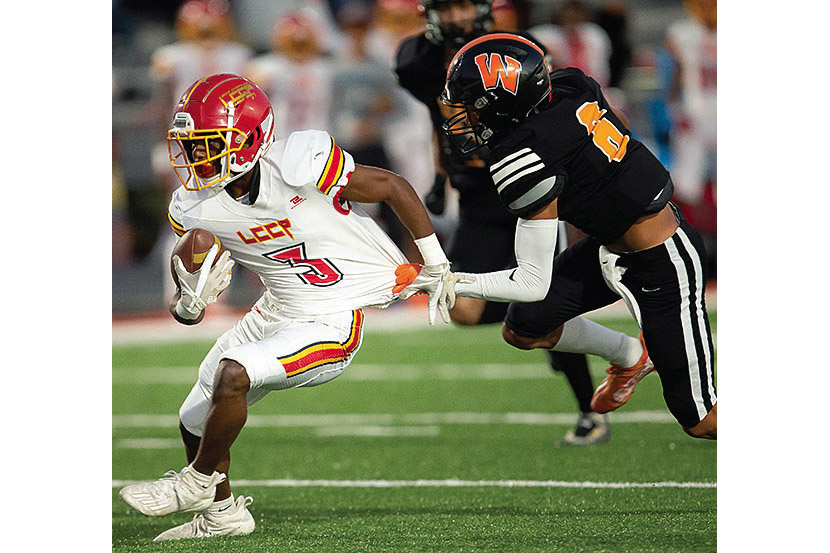 WESTLAKE — Lake Charles College Prep is looking like itself again, using explosive offense and suffocating defense to roll past Westlake 44-0 Friday night to stay perfect in District 3-3A.

The Trailblazers (3-2, 2-0) scored four touchdowns in the third quarter to blow open what had been a 12-0 game.

Elijah Garrick ran the second-half kickoff back 81 yards for a touchdown.

On their first drive the Blazers went 53 yards in five plays, scoring on a 33-yard pass from Josiah Bushnell to Matthew Higginbotham to make the score 25-0. The Blazers added scores on a 60-yard interception return by E.J. Franklin and 5-yard run by Dylen Rubin to increase the lead to 38-0 by the end of the quarter.

“That’s conditioning,” Blazers head coach Erick Franklin said of the outburst. “It’s why we condition every day. It finally turned over for us. The kids have been going pedal to the metal and it showed up in the third quarter.”

The Blazers capped the scoring in the fourth quarter on a 23-yard pass from Bushnell to Garrick.

Bushnell finished 15-of-21 passing for 265 yards and three touchdowns while running for 45 yards and two scores. It was his second consecutive game accounting for five touchdowns.

“That’s who he is,” Franklin said of Bushnell. “He’s our No. 7 (Bushnell switched to 7 to honor former Prep quarterback Dylan Simon). He is the guy that makes us go and we will be as good as he can be.”

Bushnell gave the Blazers a 6-0 lead midway through the first quarter on a 1-yard, fourth-down run.

The Blazers doubled the lead to 12-0 on a 20-yard touchdown run by Bushnell in the second quarter.

Bushnell’s play was one of the rare highlights in a flag-filled first half. He threw for 122 yards and ran for 46 more.

Prep receiver Eric Beloney had five receptions for 122 yards in the half, including a 68-yard catch-and-run to set up the second touchdown. He finished with nine catches for 162 yards.

“The defense played really well,” Franklin said. “They paid attention to details and assignments, were physical and locked into the game. I think they can be as good as our defense from four years ago. That group gave up 11 points a game on the season and 9.6 in district. Now this group is at 9.6 for the season.”

Westlake’s best scoring opportunity came in the third quarter, when it drove to the Prep 11-yard line before losing a fumble.

Jace Dawson ran for 40 yards and threw for 51 to lead the Rams.