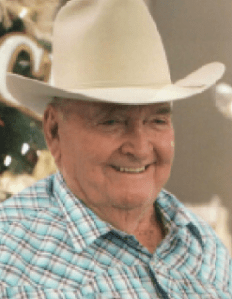 1934 – 2022
Bill Managan was born in Buck’s County Pennsylvania on April 7, 1934, and died at 88 years of age on Sept. 18, 2022.
He was predeceased by his wife, Alice Lou Guillott Managan; his parents, Hugh Vaughn Managan and Isora Fox Managan of Sulphur, La.; and his brothers, Richard Managan and Robert Managan.
Bill is survived by his brother, Tom Managan; and his sister, Ann Managan Tittsworth; his beloved children, Pamela Managan Rainey, Penny Managan Taylor, Miriam Managan Vincent, and William Vaughn Managan II along with their spouses Don Rainey Jr., Randy Taylor, Don Paul Vincent, and Sunshine Managan; Bill’s treasured 6 grandchildren, Hannah Taylor Hawker, Wil Taylor, Joe Taylor, Jax Managan, Lilia Managan, and Milo Managan along with his grandchildren’s spouses, Seth Hawker and Amanda Taylor; and two great-grandchildren, Emma Taylor and Jack Hawker.
We remember Bill for his courage, his faith and optimism, and his belief in plain hard work. Farming was a way of life for Bill and his family. He grew up working the land, raising cattle and quarter horses, growing soybeans and rice. Although Bill held different jobs, farming was always at the heart of each whether it was a farm manager for a minimum security prison or selling farm equipment to local farmers. Later in life he became known for his project management skills as a Field Engineer on large construction projects at PPG.
Strong in his faith, Bill was a deacon at Houston River Baptist Church, First Baptist Church of Sulphur, and First Baptist Church of DeQuincy. One of Bill’s biggest adventures was to go on a mission trip to Zimbabwe, Africa in 1984 where he worked with locals to drill water wells for clean water while spreading the message of Christ.
Bill enjoyed all types of hunting and raising English Setters for field trials. During their 65 years of marriage Bill and Alice were always up for a new adventure. They loved to travel around the U.S. to visit family and friends. Bill provided a great life for his family and instilled the importance of strong values and keeping your promises. A good conversation with a cup of strong coffee and always spreading joy to those around him are his legacy.
The family would like to thank all the caregivers and staff at the Woodlands Health Care Center in Leesville, Louisiana for caring for Bill over the last 10 months.
On Friday, Sept. 23, 2022, there will be Visitation 9 – 11 a.m. followed by the funeral service at 11 a.m. at Johnson and Robison Funeral Home, 107 W. Napolean Street in Sulphur, La. Interment will be a private family service at Magnolia Cemetery in Westlake, La.
Words of comfort may be shared with the family at www.robisonfuneralhome.com.