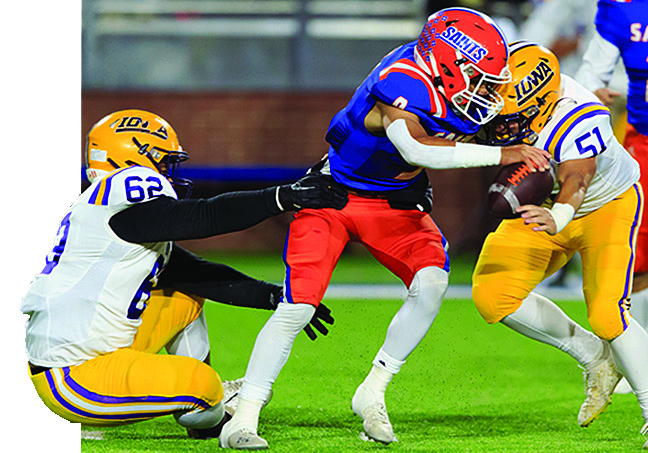 Kyron Labove, left, and Kyle Arsement, right, are two returning seniors on the Iowa defensive line. The Yellow Jackets’ group of four, including Connor Roy and Kolton Keys, work in unison, relying on experience and technique to get the job done. (Kirk Meche / Special to the American Press)

IOWA –  Iowa’s defensive line is short on size but relies on experience, technique and energy to make up for it.

“I’ve known them for a long time, I have trust in them,” he said. “I know they are going to make plays. I know they have my back and they know I have theirs. Kyle is physical and a good leader. He gets people motivated and teaches others what he does.”

Roy said he brings a physical presence to the group.

“My physicality, acceleration off the ball and heart are my strong suits,” he said. “This year I want to be a leader, help all the young bucks, be more physical and win. I worked on all aspects of my game and did a lot of work in the weight room to get ready for this season.”

Arsement said he improved last season at reading the offense.

“I was better at recognizing plays as they happened,” he said. “Now I’m working on getting stronger and faster.”

“Kyron doesn’t stop; he has a great motor,” Arsement said. “Connor has great technique. Our defense should be physical this year. We never stop.

“Last year we were able to win, win, and win – we never got complacent. I’m looking forward to doing that again this year.”

“The best part about being a defensive lineman is my teammates,” Labove said. “They always bring it and work hard. We push each other, we communicate well.

“Connor is fast, has technique and contains well. Kyle is the fastest lineman and gets past the offensive linemen quickly. I’m explosive. On blitzes I can push offensive linemen into the quarterback. I’m working on improving my speed, getting more tackles and sacks.”

“He’s one of the most improved players on the team,” Johns said. “He had a great offseason and spring. He also adds some size to our front.”

Johns said the group has a great approach to the game.