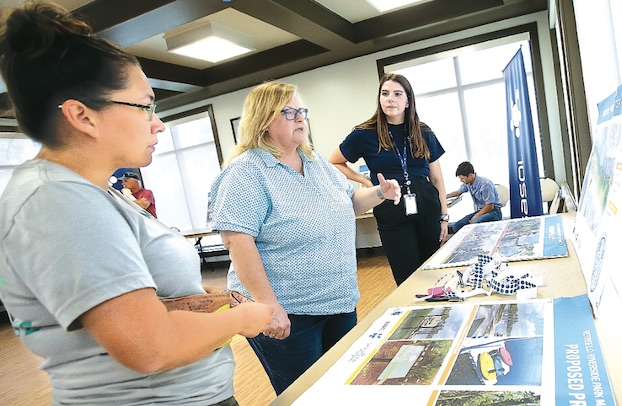 A sanctuary for man and animal alike, Tuten Park once featured nature trails, picnic areas, wetland ponds, preserved forest and a children’s playground, among various other unique urban features. The 24-acre forested park now stands in shambles due to the substantial damage it received from Hurricanes Delta and Laura.

It is no longer fit to house a variety of animals and greenery as most of its trees were damaged and destroyed; the little vegetation that remained is now overcome with invasive plant species.

But the community should not worry about this forested park oasis because after Hurricane Rita, a Master Plan was established for Tuten Park by Dana Brown & Associates based in New Orleans. The Master Plan addresses the design and program issues and recovery efforts from hurricane damage.

The Mayor of Lake Charles, Nic Hunter, said the city has executed portions of this Master Plan over the past 10-15 years. However, with the high-degree and veracity of events that have conspired over the past couple of years, the mayor said it’s time to update that Master Plan.

Supporting the upgraded proposal is a global-integrated chemical and energy company, Sasol. While Sasol did not have a hand in the original Master Plans 10 years ago, the mayor said the company has been “heavily involved and taken the lead as our private partner in recent years on Tuten Park.”

Sarah Hughes, a representative of Sasol, said the company has been densely integrated because of two significant factors. The first, she said, was due to the high volume of “employees that live here and their kids that they bring to these parks. They have invested interest in the quality of life for this area.”

The second reason derives from the recruitment and retention standpoint. Hughes said “any investment that we make in the area helps attract workforce from outside the region, and that is a win in our book.”

She said Sasol has a very high interest in investing in what is essential to their employees from an environmental stewardship standpoint.

In addition to Sasol, there is a blossoming partnership with Partners and Parks that presented two opportunities; one was infrastructure improvement, the other educational opportunities. These events were brought on by Nature in Focus, a series of educational events at the park that even went so far as to include McNeese State University students. McNeese’s involvement allowed Master gardeners and naturalists to help guide the various education initiatives.

The inclusion of Partners in Parks was not just for infrastructure and aesthetic upgrades; programming was a large portion of the partnership. The group’s involvement was of the utmost importance because, according to Hunter, “we want our parks to be living, breathing places.”

Nature in Focus provides experimental environmental education through a partnership between the city of Lake Charles Recreation and Parks Department and Sasol. Their goal is to provide educational opportunities and interpretive programs for visitors while bringing people from the community together for the overall purpose of conserving the natural environment at Tuten Park and the community.

“Certainly, to discuss the upcoming steps such as postmaster plan and priority projects is something that Sasol wants to continue to support- those education initiatives,” Hughes said.

“It is due to Sasol and their phenomenal cooperation with the help of the programming in the city that has resulted in such a wonderful response from the community for the nature and focus events.” Hunter said. “I know that we can absolutely plan on seeing more of those in the future, and that is one of the things that we are really looking forward to; it is not just getting Tuten Park back up and running, it is about getting the programming back up and running, and that is a commitment of the city and Sasol to ensure that is happening.”

While this may sound like it will cause an increase in taxes, Hunter said that “over the course of the last four or five years, Partners and Parks has received close to a million dollars that have helped to enhance our city parks with no additional burden to the taxpayer.”

Hunter said he would not take the “easy way out;” because “if we wanted to make a lot of enhancements to our parks, it would be easiest to ask people for an additional tax simply. However, we have chosen not to do that.”

Instead of raising the community’s tax percentage, the city has chosen to put in the hard work and vigorous efforts to attract various voluntary private dollars. So far, they have been successful.

Hunter said when the public and private come together to make things happen that the average tax dollars are stretched further.

The mayor said there are more than 30 parks in the area and the city is pouring its efforts and dollars into every one.

“We are hopeful and optimistic that a lot of work that is happening at our parks will be reimbursable by FEMA, but it is work that needs to be done. I certainly want people to know that, yes, we are focused on  Tuten Park, and it is important, but every park that we have in Lake Charles is important.”

Tuten Park is scheduled to complete phase one of repairs to the front portion of the park within the next 60 days, weather permitting.

“Now is the time to invest in these types of initiatives and Master Plans, thinking about long term and what that means for a community as a whole,” Hughes said.

The mayor agreed, stating that “we are at a point now where we really must start looking to the long-term. We cannot just be putting out small fires every day, we got to look toward the long term.”

This is where the idea of a Master Plan comes in, Hunter said, “so we can have a path forward to show the community what they can expect out of Tuten (and Riverside), and very importantly get their input.”

He wants those involved in the community, residents and Sasol employees, to step forward and request what they want to see in the upcoming parks.

Sasol’s Sarah Hughes, manager and stakeholder relations agreed, stating that “this is going to be a long-term vision and plan, and you cannot have that without the community’s input. We could sit in rooms all day long and talk about what we think the park should look like, but is that going to match up with the long-term community needs?”

These surveys mean a lot to the city and Sasol, Hughes said.

Participating in the plans and renovations of these parks is easy and straightforward. An online survey for both Tutuen and Riverside Parks will remain open through June 30.