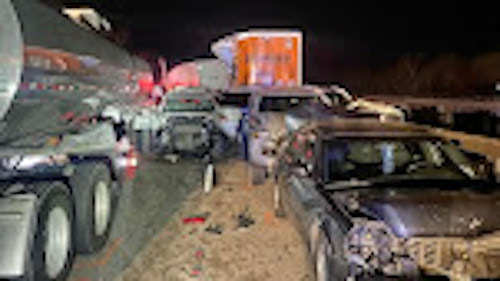 The increasing number of wrecks on the Atchafalaya Basin Bridge between Lafayette and Baton Rouge are the main focus of a bill setting up new traffic enforcement measures.wwl-tv.com

Two public officials are trying to do something about increasing accidents on the 18-mile-long Atchafalaya Basin Bridge between Lafayette and Baton Rouge. Senate President Page Cortez, R-Lafayette, and Shawn Wilson, secretary of the state Department of Transportation and Development (DOTD), know what’s happening.

The two men live in Lafayette and travel to Baton Rouge for their jobs every week. The speed limit on the Interstate 10 bridge is 60 mph for vehicles and 55 mph for trucks, but most drivers go much faster. Wilson said during a committee hearing he drove 61 mph one day and 42 vehicles passed him.

Trucks are supposed to stay in the right lane, and their drivers stayed there during the bridge’s early years. However, they have started to pass other trucks and vehicles. Cortez said one unloaded 18-wheeler cut in front of him so quickly recently he thought his vehicle might be thrown over the side of the bridge.

I had an accident near Milepost 124 on that bridge in May of 2013. The rain had stopped and a pickup truck in the left lane either slowed down or stopped because of another accident ahead. When I tried to pass on the right lane, my car started spinning on the wet pavement and I thought I might also go over the side.

It didn’t happen, but like most wrecks on that bridge traffic that was headed west came to a complete stop. Another multi-car accident last Friday afternoon shut the bridge down until 7:30 p.m. State Police said there were multiple crashes and the first one involved six vehicles.

Motorists have to take either U.S. 190 on the north when the bridge is closed or U.S. 90 on the south. I have had to take those routes on a number of occasions. Cortez said on one of his trips traffic was so heavy on U.S. 190 after a major wreck on the bridge it took him four hours to get back to  Lafayette.

Cortez and Wilson agree that legislation Cortez passed during the Legislature’s regular session is designed to modify the behavior of motorists using the bridge. Both said they see motorists using cell phones as the major cause of distracted driving.

The bill designates the bridge as a highway safety corridor. DOTD is directed in the legislation to take all steps necessary to help State Police and local law enforcement agencies in the area enforce the law with camera safety devices and the installation of additional signage.

Those signs will say “Trucks Right Lane Only,” “Safety Corridor, Fines Doubled for Speeding and Other Violations.”

Driving on the bridge is a “cat-and-mouse game,” Cortez said. Going 60 mph should take 18 minutes to cross the bridge, he said. He added that going 70 mph saves 2.4 minutes and going 80 mph saves only 4 minutes.

Speeding and distracted driving are the two main causes of accidents, Cortez said. Wilson and Cortez said drivers will know cameras are present and that will cause them to be more cautious.

Cortez said he knows cameras are a privacy issue with some motorists but “cameras are our friends, not our enemies.” The Cortez bill passed the Senate 33-0 and the House 78-12.

Wilson said Louisiana has a poor safety record and stricter enforcement of traffic laws are necessary. He said last year there were 990 fatalities on the roads statewide, 3 fatalities per day.

State Police enforcement on the bridge is difficult and dangerous. It has narrow shoulders and officers can be seen far enough for motorists to slow down before getting closer to them.

Current fines are $175 or imprisonment for up to 30 days, or both, for the first offense. For a second offense, it’s $500 and/or 90 days in jail. The Cortez bill doubles the fines to $350 for a first offense and $1,000 for second and additional offenses.

I crossed that bridge many times while covering the Legislature and have usually set my speed control at 66 or 67 mph. And on those trips, I thought I was saving a lot of time. Once those cameras are in place, you can believe I’m going to set it at 60 mph.