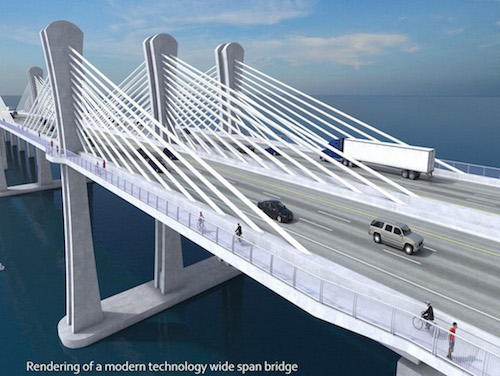 A new Interstate 10 bridge at Lake Charles over the Calcasieu River is expected to be financed through bond sales with payments coming from vehicle sales taxes.

“We can’t afford to quibble over this. This is a must.”

State Rep. Rick Edmonds, R-Baton Rouge, was talking Monday about legislation that is designed to build new Interstate 10 bridges at Lake Charles and Baton Rouge and complete work on I-49 from the Arkansas line to New Orleans.

Senate President Page Cortez, R-Lafayette, is sponsoring Senate Bill 277 that passed the Senate 36-0. It cleared the House Appropriations Committee Monday and is awaiting final action in the House. Legislative leaders have said they believe the House is ready to give the go-ahead signal.

The legislation, which Edmonds called “visionary,” creates four special accounts in the Megaprojects Leverage Fund. They would be in line to receive annual appropriations from a portion of the taxes collected from the sale, use or lease of motor vehicles beginning in fiscal year 2023-24.

The appropriations would be used to retire bonds that would be issued to raise funds for the construction of those four projects. Each project would receive 25 percent of the annual appropriations.

Items 2 and 4 are upgrades to U.S. 90 to interstate standards from the I-10 and I-49 interchange from Lafayette to New Orleans and upgrades to I-49 North where it is not yet upgraded. Cost of the I-49 South project is $8.6 billion for 15 project segments and five are complete. Cost of  the I-49 North project is from $865 million to $1.2 billion, depending on the route selection.

The State Bond Commission reports that each $25 million per year would allow for a bond sale of approximately $375 million to $500 million. Each project is estimated to receive $28 million from those vehicle taxes in the first year and around $50 million in succeeding years.

The TIMED program was mentioned Monday during committee debate. It four-laned major state highways like U.S. 171 and U.S. 165 beginning in 1989 and started out as a pay-as-you-go program. However, costs were under-estimated and the state had to eventually issue bonds to finish projects.

Cortez and Sen. Rick Ward, R-Port Allen, worked together to conceive the current bonding program. Ward was instrumental in 2021 in getting the Legislature to approve diversion of some of those vehicle taxes to transportation projects.

Both Cortez and Shawn Wilson, secretary of the state Department of Transportation and Development (DOTD), indicated the Mississippi River bridge would need a private-public partnership (P3) and tolls to be completed.

P3s may also be necessary on the three other megaprojects in order to get sufficient funding to complete construction. Like tolls, that is a difficult thing to determine this early in the process.

Rep. Troy Romero, R-Jennings, and a member of the appropriations committee, asked the question on the minds of many motorists in Southwest Louisiana. Can the Lake Charles project be done without tolls?

Wilson said the Calcasieu River bridge situation depends on whether bonds could eliminate the need for tolls, but he couldn’t rule them out completely.

Lake Charles is fortunate that it has I-210 as an alternate route that motorists can use in the event tolls are necessary. Ask most folks living in the Baton Rouge area if they would pay a toll to get across the Mississippi River quicker. The odds are they would be more than happy to pay it. That is exactly what a Baton Rouge resident I spoke with told me Wednesday.

Cortez announced Monday that Senate leaders endorsed spending $300 million for a new Mississippi River bridge and $200 million for the Lake Charles bridge. The I-49 South project would also get $200 million and $150 million would be spent for highway and bridge preservation.

Those funds can be used to complete the groundwork necessary to get these four projects off the ground and running. Our thanks to Cortez, Ward, Wilson, legislative leaders, and Gov. John Bel Edwards for coming up with a great solution.

Rep. Edmonds was right when he said, “We can’t afford to quibble over this. This is a must.”