La. digging out after twisters plow through homes 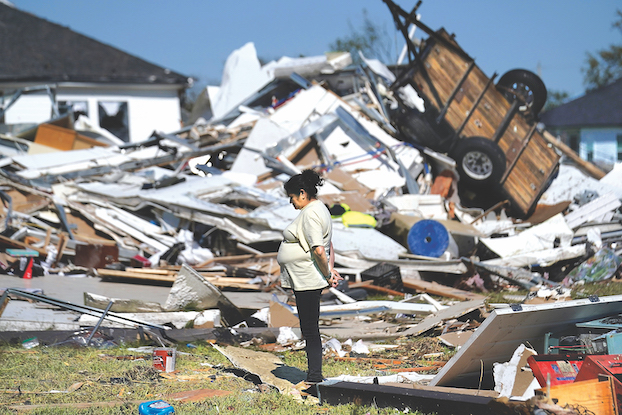 Bertelina Martinez looks over the destruction Wednesday after a tornado struck Arabi. Martinez lives near the neighborhood and her son lives across the street from her. (Associated Press)

Louisiana National Guardsmen and other responders went door-to-door in areas around New Orleans on Wednesday as the region dug out from overnight tornadoes, with Gov. John Bel Edwards declaring a state of emergency and calling the destruction “devastating.”

Other tornadoes spawned by the same system caused so much damage in Texas that the governor declared a disaster in 16 counties. Buildings were shredded in Alabama, where torrential rainfall was recorded.

Two people were killed and multiple others were injured as the storm front blew across the South, upending homes and the lives of the residents in them.

Edwards declared an emergency in St. Bernard, Orleans, Jefferson and St. Tammany parishes. After flying over the area Wednesday, he walked the streets of the tornado-stricken Arabi community near New Orleans, greeting storm victims picking through the wreckage of their homes.

“It’s awfully sad, because the destruction is so devastating,” Edwards said. “The good news is most of your neighbors outside of this narrow swath — they’re able to help.”

In front of her roofless home, another woman told Edwards she, her husband and their 1-year-old son took refuge in the bathroom as the tornado bore down.

“We just dropped down, and he jumped on top of us, covering our son,” she said. “So scary.”

There were “no injuries, casualties or significant damage reported in Orleans Parish,” New Orleans Mayor LaToya Cantrell said Wednesday, but tornadoes touched down in Arabi, just east of the city, and further east in Lacombe, across Lake Pontchartrain.

In Arabi, debris hung from electrical wires and trees amid destroyed houses. Power poles were down, forcing emergency workers to walk slowly through darkened neighborhoods checking for damage early Wednesday.

One of the destroyed houses belonged to Jibri Brown, who had not yet spent the night there. She had started moving her belongings into the white house Saturday and spent Tuesday having her TVs mounted. They’re still on the walls, she says, but the house around them is mangled and knocked off its foundation.

Amy Sims, who jumped into her car when the tornado warning sounded and drove to the Arabi Heights area to check on relatives, said she “wasn’t mentally prepared” for the devastation.

“A bomb looked like it had gone off,” she said, describing medics, some crying, dodging live wires as they went door-to-door through shattered homes.

Television stations broadcast live images as the storm damaged an area about 2 miles (3.2 kilometers) long and a half-mile (0.8 kilometer) wide in St. Bernard Parish, where Ochsner Health said eight patients were treated in an emergency department.

From the air, the Arabi twister’s path reflected in a tight swath of homes that were roofless or reduced to splinters, the wreckage line interrupted in spots where the tornado apparently skipped over buildings. Outside that destruction, homes appeared intact.

Collin Arnold, director of homeland security and emergency preparedness in New Orleans, described “incredible devastation” in Arabi, where he said fire, EMS and police officers from across Louisiana were searching and assessing damage.

Louisiana activated 300 National Guard personnel to clear roads and provide support. They joined firefighters and others searching door-to-door to make sure no one had been left behind, said John Rahaim Jr., the parish’s homeland security director.

Residents of Arabi swept up broken glass and tried to salvage their belongings. The community next to the city’s Lower 9th Ward was wrecked by Hurricane Katrina in 2005 and hit hard again when Hurricane Ida swept through last year.

Michelle Malasovich was texting relatives from her home in Arabi when “all of a sudden the lights started flickering.”

“It just kept getting louder and louder,” Malasovich said of the storm. After it passed, some columns were blown off their porch and her Jeep’s windows were blown out. Others fared worse: “Our neighbor’s house is in the middle of the street right now.”

The couple inside that home emerged from the wreckage seeking help to rescue their daughter, who was on a breathing machine and trapped inside, neighbors and authorities said. St. Bernard Parish President Guy McInnis later said the girl was “doing fine.”

Lauren Neupert wasn’t at her Arabi home when the tornado hit Tuesday night, but her partner and their 2-year-old daughter were, hiding in the bathroom and emerging unharmed.

But the house didn’t fare as well, with blue sky visible Wednesday where the roof had ripped off. Inside, Neupert said it looked like it had snowed, with bits of insulation strewn about.

“I know it will be months before I’m able to come back to my house,” she said.

As the storm front moved eastward, an apparent twister shredded a metal building and shattered windows east of Mobile Bay. The weather service reported more than 8 inches of rainfall in the central Alabama city of Sylacauga overnight. The roofs of several homes were damaged in Toxey, Alabama, where tornado warnings were issued.

The Mississippi Emergency Management Agency said a dozen counties had damage to homes and two injuries were reported.

The vicious weather hit Texas on Monday, with several tornadoes reported along the Interstate 35 corridor. In Elgin, broken trees lined the rural roads and pieces of metal hung from the branches as residents stepped gingerly through the mess.

Texas Gov. Greg Abbott said 10 people were injured by storms in the Crockett area, while more than a dozen were reportedly hurt elsewhere. The Grayson County Emergency Management Office said a 73-year-old woman was killed in Sherwood Shores, about 60 miles north of Dallas, but provided no details.