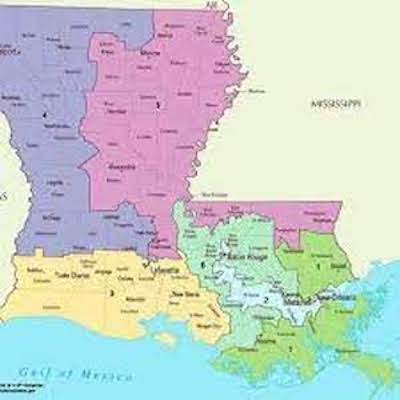 Louisiana legislators will be asked to create more minority districts at their special session, and that is expected to create some problems because of where those minorities live. This map is the current six-member congressional districts.

Black spokespersons at nine public hearings on the redrawing of election lines for six Louisiana public bodies have made it clear they want additional representation on some of those public bodies. It’s a tall order facing state legislators when they hold a special session on redistricting Feb. 1-20.

The Legislature’s Joint Governmental Affairs Committee will hold its 10th and final public hearing on redistricting today in Room 5 at the state Capitol. The committee will then begin work on drawing proposed election boundaries to be decided at the special session.

Redistricting takes place after the U.S. Census every decade. The six bodies are the state House and Senate, Congress, the Public Service Commission that regulates utilities, the state Board of Elementary and Secondary Education (BESE), and the state Supreme Court.

Black organizations definitely want another majority-minority district in the U.S. House of Representatives and on the BESE board. That is a district in which the majority of the constituents in the district are racial or ethnic minorities. They are also expected to want more of those districts on some of the other public bodies.

The state had a second majority-minority district twice in the 1990s but the U.S. Supreme Court ruled that political boundaries couldn’t be drawn for the sole purpose of boosting minority strength and both districts were dissolved.

In order to get the required number of Blacks in those two districts, one of them was Z-shaped and 600 miles long. The other slashed across 15 parishes from Shreveport past Baton Rouge.

Federal law says if race is found to be the predominant overriding factor in creating minority districts, strict scrutiny will apply.

Those who have spoken for a second majority-minority congressional district insist a second district is possible. They have drawn up proposed election districts that they believe will pass muster.

Democratic Gov. John Bel Edwards supports a second minority congressional district but said there are two reasons it could be difficult.

No. 1, he said it depends on where the Black populations are located.  No. 2, “If we do it, of course, I don’t know that we can have two north Louisiana districts continue to look like they do because it would be a major reworking of the map.”

State legislators who serve the areas in those two north Louisiana congressional districts have been quick to defend them and insist they want them to continue.

Blacks want a third seat on the BESE board that has eight elected members and three that are appointed by the governor. Democratic Gov. John Bel Edwards and state Sen. Cleo Fields, D-Baton Rouge, and chairman of the Senate Education Committee, both voiced support for that third minority member.

Fields, by the way, was elected twice in the 1990s to that second majority-minority congressional district that was rejected by the courts.

A letter from 15 organizations says the failure to add a third minority member to the BESE board would likely violate the Voting Rights Act of 1965. They argue that Blacks make up one-third of the state’s population and 48 percent of students attending public schools are minorities.

Election lines for the seven-member state Supreme Court haven’t been redrawn since 1997 and the district populations are way out of balance. However, it takes a two-thirds vote in the state House and Senate to redraw those election lines this year.

Blacks have made it clear that lawsuits will be filed if they don’t have some success at the special session. Other states are expected to also contest some new election lines.

The Biden administration has sued Texas to block its new congressional map. It accused the state of gerrymandering to shut out nonwhite people in violation of the federal voting rights law.

While the U.S. Supreme Court closely monitors redistricting based solely on race, it doesn’t interfere when new election lines protect political parties and public officials. That 2019 ruling will  be considered once again during the court’s current term, according to the National Conference of State Legislatures.

If drawing election lines based on race isn’t allowed, it should also be illegal to do it in order to protect political parties and public officials.