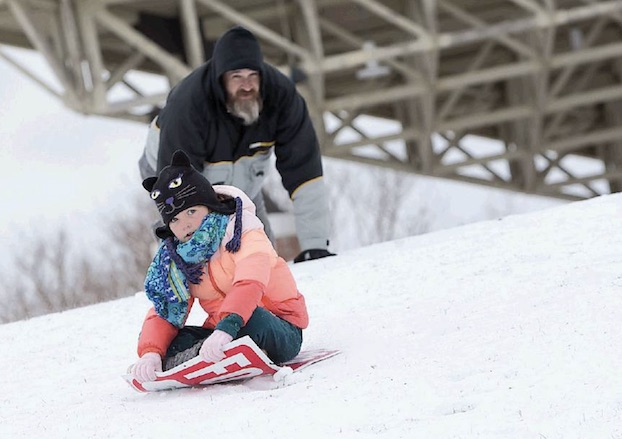 Chris Maddox and his daughter Sam sled down the hills at the amphitheater behind the Lake Charles Civic Center on Feb. 15, 2021. (Rick Hickman / American Press Archives)

The frigid winter weather that swept across the area mid-February caused widespread power outages and depleted the city’s water reserves while leaving a blanket of ice across Lake Charles.

At the direction of the governor, the Louisiana National Guard sent more than 1,200 Guardsmen to Southwest Louisiana, who utlimately distributed more than 1.2 million bottles of water to residents as well as 414,400 gallons of bulk water to area hospitals and other medical centers.

The winter storm, along with Hurricanes Laura and Delta, were “once-in-a-generation events” in a 12-month span, Hunter said.

“When you pile these on top of each other, I certainly would hope we have a long road ahead of us before we encounter any of these instances again,” he said.

Little did he know that in three months, Mother Nature would drop heavy rainfall to the city resulting in severe flooding.

“Every plumber I’ve talked to is hundreds and hundreds of (service) calls behind,” Heise said at the time.

Hospitals were allowed to run tanker trucks around the clock from the Lake Charles water systems, causing an extreme but necessary demand on the system. The city of Westlake offered some of their own tanker trucks to help with this demand.

Entergy Senior Communications Specialist Brandon Scardigli said in a news release that its reliability coordinator, Midcontinent Independent System Operator, directed the power outages for customers in the southwest area of its service territory. Because the cold temperatures drove up demand for electricity, the outages were done “as a last resort” to keep “a more extensive, prolonged power outage that could severely affect the reliability of the power grid.”

Despite the challenges with water and electricity, there were no major public safety issues, Hunter said.