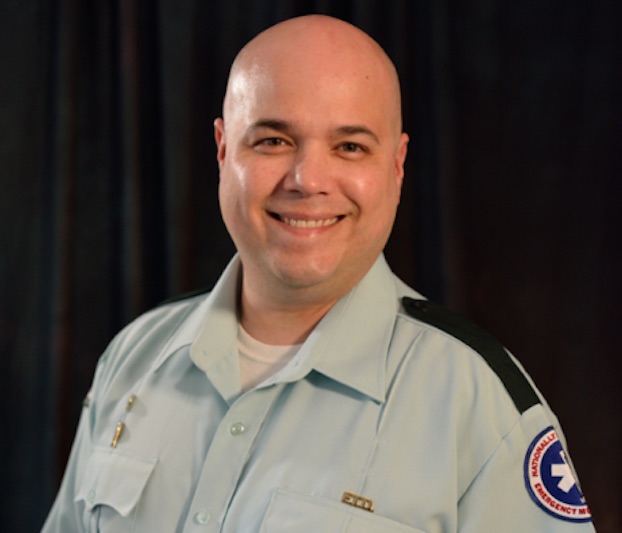 Sulphur resident Chris Broussard has been named regional EMT of the year recently by Acadian Ambulance. (Special to the American Press)

Sulphur resident Chris Broussard remains humble this Christmas season despite his recent selection as regional EMT of the year recently by Acadian Ambulance. He was selected out of EMTs servicing the Calcasieu, Jeff Davis and Acadia parishes.

Acadian Ambulance officials said Broussard has established himself “as a courteous, compassionate and professional patient care provider” who has earned the respect of his management team, peers and ambulance customers through his devoted work ethic and positive attitude.

If you ask Broussard, though, he’ll tell you that he has “just been being myself” throughout his work and genuinely wanting to help others through whatever health crisis they may be facing when he arrives. He said he tries not to let the award or recognition “get to him.”

“Being named regional EMT of the year is nice. Everyone likes an ‘attaboy’ every once in a while,” he said simply.

While Broussard now lives in Sulphur, he was born and raised in Lake Charles and still holds the area close in his heart.

His journey with Acadian Ambulance began eight years ago when a simple suggestion from a few of his friends led him to considering a career in Emergency Medical Services.

He has now become a field training officer for Acadian, where officials said he receives compliments from new employees on how thorough, patient and professional he treats them during their early days of on-the-job training and orientation.

“Brousssard is a hard worker with a great attitude and is always willing to pitch in and help when asked,” Acadian spokesperson Caitlin Russo said.

Broussard was recognized officially for his hard work in November during a virtual event attended by Gov. John  Bel Edwards, who served as the keynote speaker.

Still, Broussard said he intends to remain humble about the attention, and just focus on giving back to his community.

“That’s my favorite part about my job. It allows me a greet way to play a part in our community,” he said.