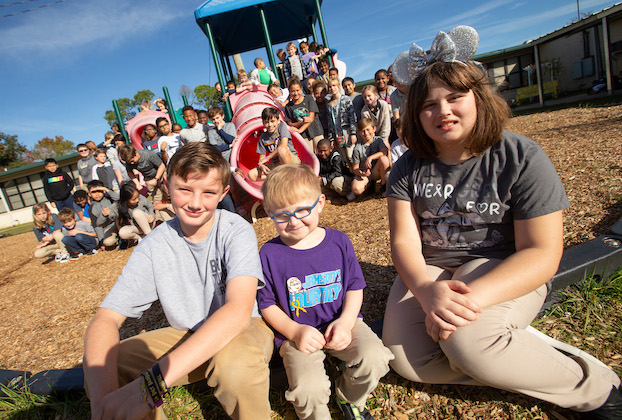 A.A. Nelson students Luke Governale, from left, Jaxson Spikes and Elly Domingue are supported Wednesday by their classmates during Purple and Gray Day. First-grader Spikes has been fighting stage four neuroblastoma since he was 3 and fifth-grader Domingue will be having a brain tumor removed on Friday. (Rick Hickman / American Press)

Purple and gray clothing were worn in support of Jaxson Spikes, first grade, who has been fighting stage four neuroblastoma since he was 3 and Elly Domingue, fifth grade, who is having a brain tumor removed on Friday.

“We actually consider ourselves insanely lucky because Elly is on the spectrum and part of her work up for ABA therapy is to have an MRI. It was like an accidental finding. It would eventually have shown up with issues but we think it’s just a miracle they found it.”

The tumor is the size of a lima bean and has been growing very slowly over the course of what’s been a long year of test after test.

“ ‘Take it out or watch it. There are no right answers.’ This is what we were told by multiple people,” Domingue said.

The family decided taking it out for testing was the best option and Elly will have surgery on Friday at M.D. Anderson Cancer Center.

Watching and waiting “wasn’t an option for us,” LeLeus said of her son’s diagnosis. What started out as a fever and constipation when he was 3 years old in 2018 quickly took a turn for the worst when Jaxson’s doctors took an ultrasound of his stomach.

“Friday at midnight we found the tumors. They sent us to New Orleans and the next week everything was shifted all the way up to his esophagus,” LeLeux said describing how quickly a tumor on her son’s right adrenal gland grew and spread within a week.

The family eventually made their way to  St. Jude Children’s Research Hospital. There, Jaxson underwent 12 rounds of chemotherapy, 11 rounds of antibody therapy, a bone marrow transplant, tumor resection and 18 rounds of radiation.

“Sixteen months of treatment ended up being 18 months because there were tons of complications from that surgery,” LeLeux said.

After such a long journey, Jaxson had clear scans at the end of 2018 and is considered “No Evidence of Disease.” In 2023, if his NED status continues, he will be considered in remission and will switch to care under St. Jude’s long-term clinic.

Jaxson and Elly were at school on Wednesday happily celebrating with their classmates. Domingue and LeLeux credited A.A. Nelson’s faculty and staff for their support throughout the journey and on Wednesday’s special day.

“One of the things I was telling Mr. Caldwell (principal) is just the fact that she (Elly) was here at Nelson (was a reason to proceed with surgery). We could’ve watched and waited but they’ve been so supportive here,” Domingue said.

“They were with us too and it was amazing,” LeLeux said. “Watching, making sure they’re staying healthy…”

“Yes. They made it clear they were going to rally around us, which they have. They’ve been so accommodating. The whole process of acceptance, being strong, that this a way of being brave— all of her teachers were very instrumental in this.”

Both mothers agreed that the greatest thing community members can do to help support the families along their journey is to pray. “Prayers on Friday,” Domingue said of her daughters’ surgery and “Prayers for remission,” LeLeux said.