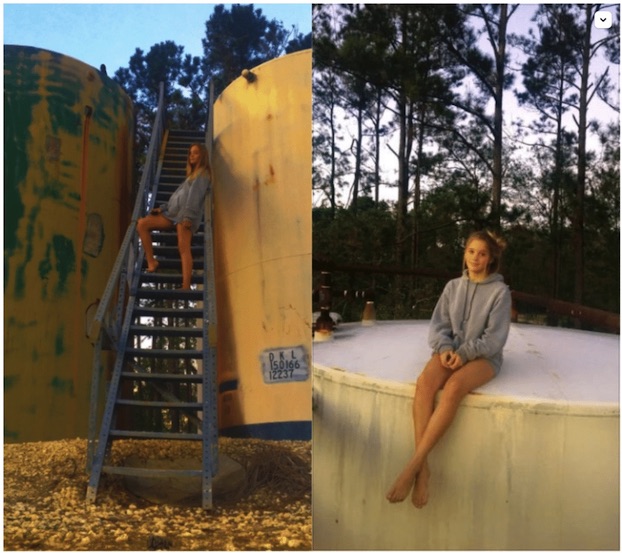 Zalee Day-Smith poses for photos on an oil field tank battery in Ragley prior to her death on Feb. 28. (Special to the American Press)

BATON ROUGE — Louisiana regulators have established new rules for oil field tank batteries after an explosion killed a 14-year-old Ragley girl earlier this year, and plan to identify all such storage tanks across the state to encourage compliance.

The state Department of Natural Resources cited the February death of Zalee Day-Smith when announcing the safety measures last week. The Advocate reported that State Police investigators believe she was sitting on a tank near her mom’s house in the rural Ragley community when it blew up, throwing her into the air and killing her.

“We may never know exactly what happened on that site when Zalee died and accidents of that kind may be rare, but we have to do what we can to minimize the chances of it ever happening again by doing more to make people aware of potential hazards and keep them off these sites if they don’t belong there,” Commissioner of Conservation Richard Ieyoub said in a news release.

Tank batteries store oil wells that aren’t connected to major pipelines. They can hold hundreds of thousands of gallons of crude oil and can emit flammable fumes.

The new rules require operators to surround sites with fences at least four feet high, with a gate that’s locked when the sites are unattended. Tank hatches have to be securely sealed when unmanned, unless they’re part of a pressure relief system, and signs have to note the hazards of the tanks.

These regulations apply to sites within 500 feet of a highway or a home, 1,000 feet of a school or church, or anywhere within the limits of a city, town or village.

Tank batteries were previously “treated as just another part of a well site,” the Department of Natural Resources said, so they weren’t individually identified. The Office of Conservation is working to make a list of all tank battery sites in Louisiana, which hasn’t been done before.

A 2011 report by the U.S. Chemical Safety and Hazard Investigation Board highlighted the dangers of not having warning signs and fences at storage facilities. It noted that 44 people were killed and 25 were injured in 26 explosions from 1983-2010.