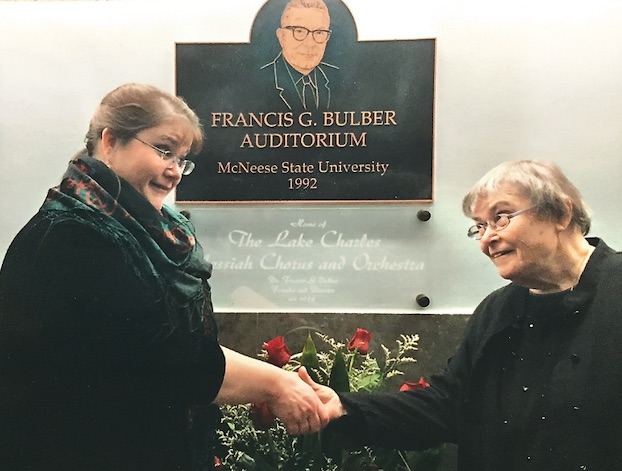 Colette Bulber Tanner, left, with Patricia Bulber at a past performance of Handel’s “Messiah” in the Francis G. Bulber Auditorium at McNeese State University. Tanner will be conducting the 80th performance of “Messiah” on Dec. 5. (Special to the American Press)

The 80th performance of George Frideric Handel’s “Messiah” will return to the McNeese State University campus on Dec. 5 after two hurricanes, flooding and an ice storm crippled the area and led to a one-year hiatus.

The beloved performance was founded during the 1939-1940 school year by McNeese professor Francis G. Bulber, who combined church choirs with university students to perform the work. This year’s performance will take place in the auditorium that now bears his name and will be conducted by Bulber’s daughter, Colette Bulber Tanner.

Patricia Bulber, the 91-year-old wife of the late conductor, said the ‘Messiah’ signifies the true start of the Christmas season in Southwest Louisiana.

“Even with the parades and everything that goes on now, ‘Messiah’ is the stronghold,” she said.

“Dr. Bulber started the ‘Messiah’ in 1939 when he first came to school here,” she said. “It is considered a ‘must’ in the study of music and when he came here, he found that students didn’t even know about it. He had to go around teaching everyone what the ‘Messiah’ was and it’s been part of this area’s history ever since.”

She said originally, the ‘Messiah’ was performed with just two pianos and a group of singers.

“But then he got an orchestra together and it grew from there,” she said.

She said Bulber was passionate about music since “he was knee-high to a grasshopper.”

“You have to know him to understand him,” she said. “He was positively ‘Mr. Music’ and was given this opportunity to come here and he just really developed. I’d say about 90 percent of music teachers in the state of Louisiana and in Texas have been under his supervision and his charge as head of the department.”

This year’s performance will include a chorus and orchestra made up of community members from the five-parish area.

Bulber said she first began teaching at McNeese in 1954.

“There had been an increase in piano study at the school and Francis needed another pianist so he put out notices about the position and I was chosen,” she said.

Among her students was Daryl Burckel, now McNeese’s president.

She said when she retired from the Lake Charles Symphony, Burckel presented her with two dozen yellow roses — which still touches her when thinks about it.

“His determination is very much like Dr. Bulber’s,” she said. “They both don’t start something that they can’t finish. He has taken a hold of McNeese and has plans to make it prosper.”

Bulber said she played the harpsichord in the 1954 “Messiah” performance and in every one since — until now.

“This year, I’ll be in the chorus as an alto,” she said proudly. “If you perform on the instrument, it’s a different feeling than singing.”

Bulber said she is excited for her daughter to conduct the historic performance.

“She is so talented, she is so equipped and she does so much in the background to foster whatever she can offer,” Bulber said of her daughter, who teaches at Our Lady Queen of Heaven School and St. Louis Catholic High. “The group responds to her very well.”

Bulber said she sees a lot of her husband in her daughter.

“She conducts just like him,” she said with a laugh. “I’m just edified that she has taken it over and is in charge now and she will keep it going. To see her, I see him.”

Bulber said both of their children — they also have a son who lives in Illinois — grew up idolizing their father and following him around the music department.

“I wish I had pictures of it, but our son used to put on Dr. Bulber’s coat for his tails and stand in a chair and put a stand up and he would conduct the ‘Messiah,’ ” she said. “When I went to visit him in Illinois, I got to hear him sing the close of the ‘Messiah’ in the chorus that they did up there.”

Bulber said her daughter was determined to bring the “Messiah” back to the area again after a year of hardships in Southwest Louisiana.

“We ran amok with the storms and everything else last year, you know,” Bulber said. “The spirit of the ‘Messiah’ is something that Lake Charles needs right now.”

Bulber said her daughter sent out letters to those who had previously performed, inviting them to return for the 80th performance.

“At the first practice two weeks ago, 35-40 people came then on Tuesday night’s practice, about 50 people showed up,” Bulber said. “Everyone who has come has been most excited to do it again. It’s come at the right time and is needed.”

The performance is set for 3 p.m. Sunday, Dec. 5. Admission is free.