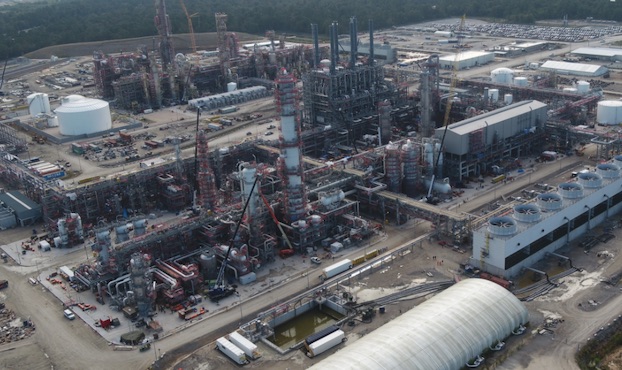 Production at Lotte Chemical’s ethylene glycol manufacturing plant in Westlake is underway. The plant is part of a $3.1 billion project, which also includes an ethylene cracker plant that will produce 1 million tons of ethylene per year. (Special to the American Press)

Calcasieu Parish School Board members on Tuesday approved one industrial tax exemption while denying two others.

The exemption would generate $5.67 million in property taxes over 20 years, along with $3.19 million in sales taxes generated from capital expenditures. The Police Jury and Sheriff’s Office still have to take action on their parts of the exemption.

Officials with LACC told the School Board that the application is for an expansion of its ethylene plant to construct a seventh heater. The project is a $72.5 million investment and will add three new direct jobs and 125 construction jobs. The expansion is expected to begin in 2023.

The project, which is already complete, created five jobs.

A second 10-year, 80 percent ITEP application by W.R. Grace failed with a 9-5 board vote. The application was for capital projects “not considered maintenance, but upgrades or improvements over the next two years,” the description stated. Other improvements included new storage tanks and other new equipment.

Some projects listed in the description would be considered rehabilitation to deal with systems that are obsolete, which some board members took issue with using an ITEP for.

“I don’t feel I can vote for this because it’s saying you’re rehabilitating your existing plant because it’s obsolete, therefore you didn’t take care of it to begin with,” Castille said.

Wallace said his biggest concern with the application was that it would only create two direct jobs.

Conviction of man who ran over girlfriend with car…