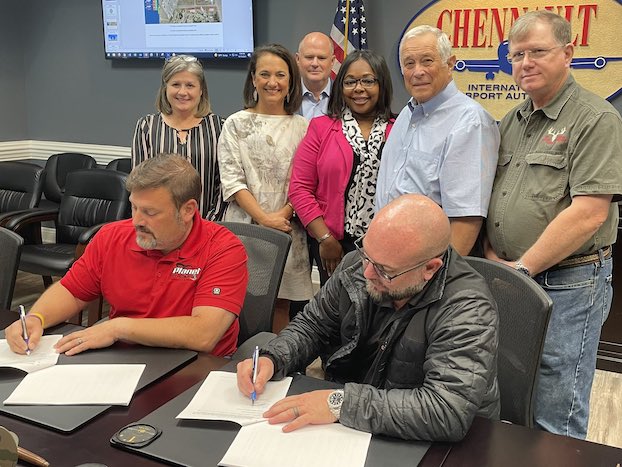 It’s the first lease signed on the property, now referred to as Site 1, since Chennault acquired it from the city of Lake Charles three weeks earlier, Chennault Executive Director Kevin Melton said. The lease is for 30 years, with two 15-year renewal options.

Brandon Robinson, Planet Construction co-owner, said the 40,000-square-foot development will include the company’s national office, along with two hangars that will house up to 20 executive-level airplanes.

“We’re committed to being out here,” he said.

Operating since 2016, Planet Construction builds fitness centers nationwide, is licensed in 34 states and is responsible for the employment of roughly 2,000 people through its construction business, Robinson said. Developing at Site 1 will make it easier to meet with clients out of state, he said.

“It’s all an efficiency move,” Robinson said. “If we need to get on a plane to go to a job site, we don’t have to travel to the airport. We want our plane to be in our hangar where we can get right in it and go.”

However, the high cost of materials, including steel, has put the construction timeline on hold, according to Jeff Babineaux, Planet Construction co-owner.

“It could be six months or 12 months; we’re not sure,” he said. “We’re seeing the cost of goods plateau and have seen some decrease.”

The partnership between Robinson and Babineaux was born out of the ownership of the first Planet Fitness location, which opened on Ryan Street in March 2012, Robinson said. Babineaux, a Sulphur-based commercial general contractor for more than 20 years, was hired to build the initial location.

Robinson became partners with United PF Partners, the largest fitness franchisee in the nation, in 2016. Robinson and his partners sold United PF Partners and its 180 locations across 17 states on December 30, 2019, right before the start of the COVID-19 pandemic.

Robinson thanked Melton and Andrea LaFleur, Chennault director of executive and airport affairs, for having an open and transparent experience in securing the lease.

“I can’t see how they’re not going to do anything but further develop this area because they make that process, which is sometimes tumultuous, so easy and user-friendly,” he said.

A second lease that includes seven additional acres at Site 1 to develop an event center, should be signed soon.