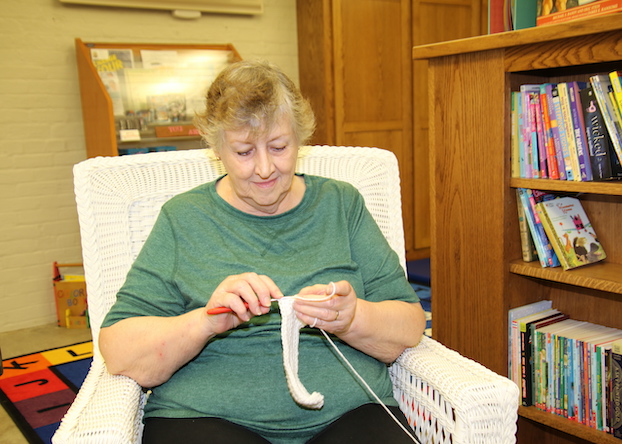 JENNINGS — A group of women from Jeff Davis Parish have found a way to have fun and connect with others while learning a new craft.

It’s a place for people to come together and have fun, regardless of their artistic talents, she said.

Whether you knit, crochet, quilt, draw, color or paint you are invited to join in for good company, interesting conversations, to share ideas and compare crafting techniques.

Spears said the club is for anyone who already knows how to craft or are interested in learning something new. She said the group works at their own pace on projects that interest them.

The group meets 1-2:30 p.m. the second and fourth Monday of each month at the Jeff Davis Parish Library, 118 W. Plaquemine St., Jennings.

Spears said the group initially started as a crochet club.

“We’d noticed a lot of young people had started crocheting and thought it would be good if some of the older ladies could help them with their techniques and stitches,” Spears said.

But there is way more to the craft club than the crafts, according to Pat Forestier of Jennings. She said it’s getting to know other people, helping each other and comparing crafting techniques.

“It’s a very nice group of people here and everyone is doing a great job,” she said. “It’s a nice way to meet people who have a similar interest and want to learn from each other.”

“It’s fun being creative and you get to see what you create when you make things,” she said. “The people in this group are really creative and multi-talented. Just being here gets your creative juices flowing.”

Forestier gives many of her creations as keepsakes and gifts for family and friends.

For Diana Turner, who moved to Jennings via Ohio and Las Vegas, the club is about more than just a hobby. She said the craft club is a great way to meet people in her neighborhood.

“It’s a smaller town than I am used to so this is an easy way to meet and interact with people and get to know people,” she said.

Turner taught herself to quilt, crochet, knit and embroidery. She also sketches.

“I really love quilting because it requires other people,” she said.

Gwendolyn Newman of Lake Arthur has never crocheted before, but has learned enough techniques from others in the group to make a small scarf.

“I like that I can create something by my own hands,” Newman said. “It’s also calming and lets you think.”

Thea Spears of Jennings is learning to crochet, but spent her time Monday sketching illustrations.

“This gives me time during the week to do my own work,” she said. “It’s a calm place and I don’t get distracted by others.”

Her younger sister, Molly is learning to embroidery a pillowcase.

“I like to embroidery because it’s calming to me with the receptive motions,” she said.

The sisters say they enjoy being creative, working on their craft projects and talking about what they are making with others in the group.