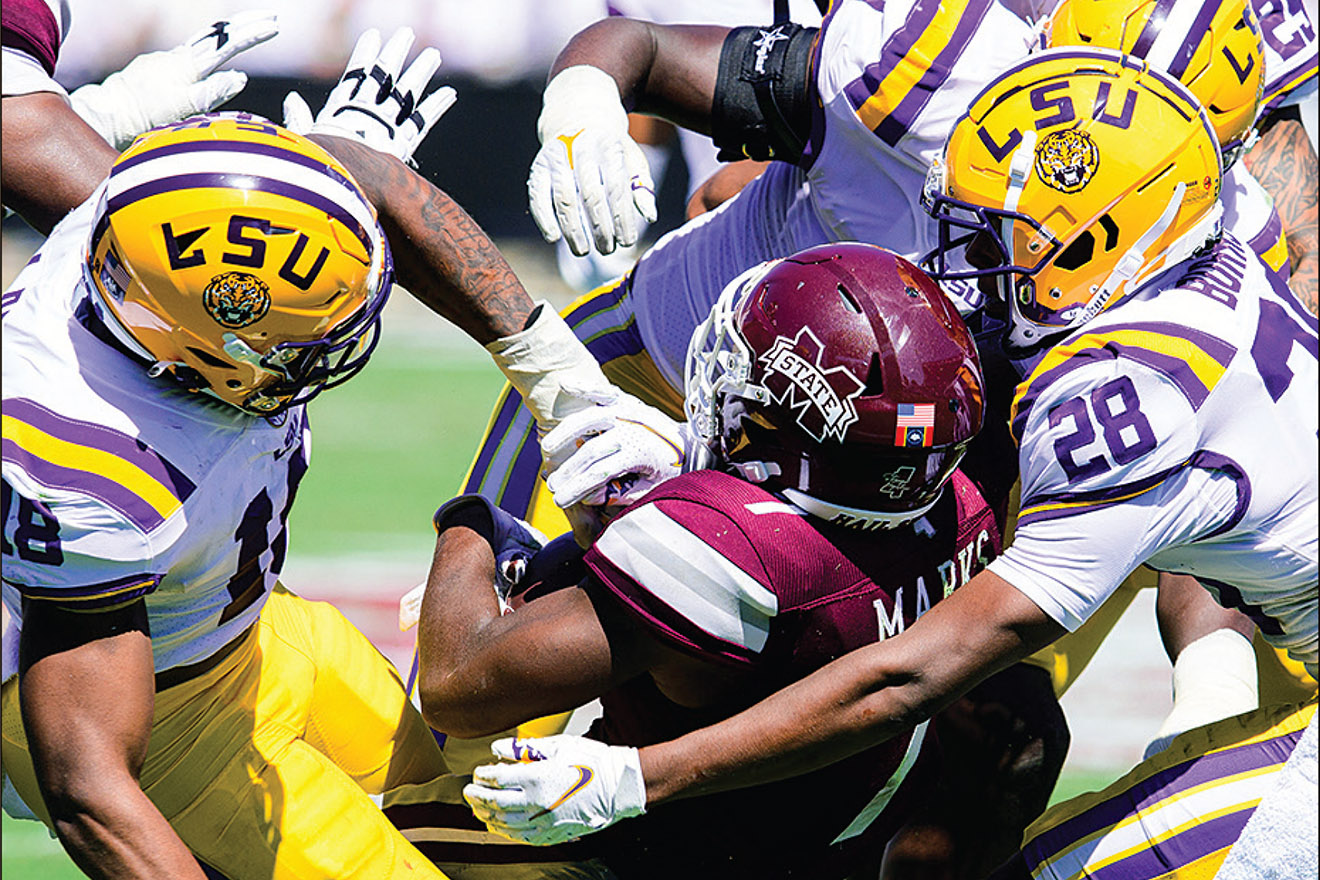 On Saturday he got his chance. Max Johnson passed for 280 yards and four touchdowns to lead the Tigers to a 28-25 victory over the late-rallying Bulldogs on Saturday.

LSU (3-1, 1-0 Southeastern Conference) had 343 yards offense and was 5 of 32 on third down but reeled off several big plays when needed.

Mississippi State (2-2, 0-1) dominated the stat sheet with 486 yards offense and 12 thirddown conversions, but turned the ball over twice inside the LSU 30-yard line and regularly squandered momentum-building drives.

“You just gotta know, that’s Mississippi State’s offense,” LSU linebacker Damone Clark said. “All week our coaches have been saying, ‘Don’t bite on the cheese.’ Just keep the ball in front of you, make them make the checkdown and don’t let them make the big plays. I’m really proud of the way our defense fought, really proud.”

Neither team established dominance early, and LSU led 7-3 at the half. But on the second play of the third quarter, the Bulldogs bit on a play-action fake and Johnson found sophomore receiver Kayshon Boutte over the top for a 64-yard score, his second of the day.

“It was an RPO (runpass-option),” Boutte said. “It was open the first time, but we handed it off. The safety came down. So we ran it again, and it was open again the second time too.”

Later in the quarter, the Tigers confused the MSU defense again on a similar play and Trey Palmer pitter-pattered into the end zone for a 58-yard touchdown, no defender within 20 yards.

As has become their custom, the Bulldogs made a push in the fourth quarter. Will Rogers found Makai Polk and Austin for late touchdowns, then with less than 2 minutes remaining hit Jo’Quavious Marks for a 16-yard score and Malik Heath for the 2-point conversion to close the gap to 28-25.

“I can’t say we become more confident,” MSU head coach Mike Leach said. “It’s a mental deal. We take comfort in knowing that it can’t get any worse, I guess. And we let ourselves play.”

But the ensuing onside kick didn’t go 10 yards and the Tigers were able to run out the clock. It was the second consecutive week MSU misfielded an onside kick late in the game.

Johnson was 17-of-27 passing with one interception and Boutte caught four balls for 85 yards. Johnson became the first Tiger since Rohan Davey in 1999 to throw three touchdown passes of 40-plus yards in a single game.

Rogers was 47-of-62 passing for 371 yards with three touchdowns and one interception. Marks rushed for 46 yards and had nine catches for 67 yards and a touchdown. Rogers’ 67 attempts were the second most in program history against LSU.

How much respect does LSU have for the Air Raid? The blitz-happy Tigers spent most of the day with eight defenders dropping back in coverage, a scheme Orgeron says they developed in the offseason specifically for this game.

“When you lead the nation in sacks, hard to go with a three-man rush,” Orgeron said. “But we looked at what Arkansas did to the them last year, how they beat them, and I told our guys to just be patient and stay sharp. Explosive plays killed us last year. Give our defensive guys a lot of credit, they’d never played that scheme before. We just practiced it this week.”

LSU: The Tigers didn’t look great early, but showed patience in the pocket and executed the big plays when they needed them. It was a crucial win for Orgeron’s team if it hoped to remain relevant in November.

Mississippi State: The Bulldogs have lost back-to-back winnable games and the schedule only gets tougher.

LSU: The Tigers return home to host No. 23 Auburn next weekend in another SEC Western Division brawl.

Mississippi State: The Bulldogs face seventh-ranked Texas A&M in College Station for their first SEC road trip of the season.