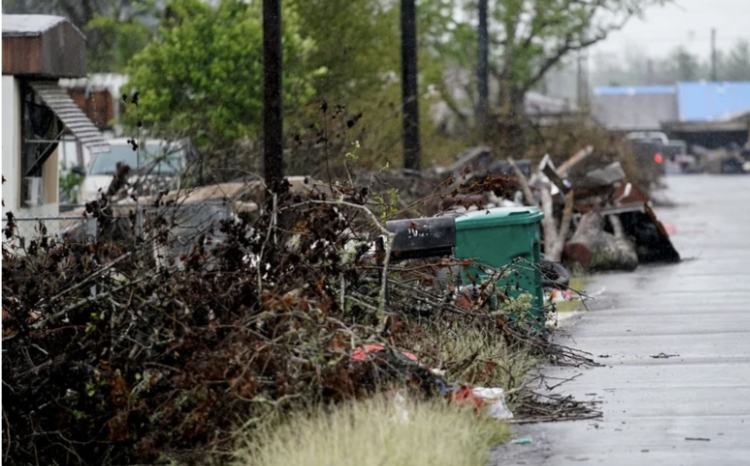 Removing debris that Hurricanes Laura and Delta left throughout the 800-plus drainage laterals in Calcasieu Parish last year is a massive undertaking that could cost anywhere from $100 million to $150 million, or more, officials said.

A crew hired by the parish to capture aerial footage after the hurricanes identified more than 20,000 post-hurricane debris points throughout the drainage laterals, Kelly Fontenot, parish assistant finance director, said Friday. While the parish’s two drainage districts have spent months clearing hurricane debris from laterals, Parish Administrator Bryan Beam said the task is far too large. It would take 8-10 years to finish, even if the parish dedicated every public works crew to help out the drainage districts, he said.

“This really emphasizes how big a challenge we have with this,” he said.

The Police Jury has hired Crowder Gulf to clear the debris, which could take up to two years, Beam said. Calcasieu Parish is working with FEMA to get 90 percent of the cost reimbursed. The parish and the two drainage districts will share the remaining 10 percent not covered by FEMA, which could cost $10 million to $20 million, Beam said.

“If you add them up in a line, it would stretch from El Paso, Texas, all the way to Jacksonville, Fla.,” he said.

Fontenot said the cost per cubic yard of removing debris from drainage laterals is 10 times more than roadside debris because of the complexity of getting to the laterals.

Calcasieu Parish has a sizable fund balance, with $365 million projected by the end of this year, Beam said. However, a majority of that can’t legally be tapped into to clear the laterals because it is made up largely of dedicated funds.

Roughly $210 million is reserved for current or upcoming capital projects, with $174 million set aside to build and maintain 1,100 miles of roads and bridges in the unincorporated areas, Beam said.

“We believe these are very important services and projects that the public wants and expects us to do in parish government,” he said.

Various dedicated funds are used in accordance with the taxes that Calcasieu Parish voters have approved for years, Beam said. Most of the dedicated parish property taxes fund services such as mosquito control, juvenile justice, public health, criminal justice, library and Burton Coliseum.

“Legally, we cannot use money from one of those funds for something else,” he said.

Beam said the parish intends to use fund balances from its sales taxes to cover its share of the local 10 percent cost share for clearing the drainage laterals.

Working with FEMA on the effort is complicated, and it requires the parish to follow specific guidelines in order to secure the 90 percent reimbursement. Ultimately, Beam said, it’s the best option in getting hurricane debris cleared from drainage laterals.

“We do not want to look away from federal help,” he said. “It makes no sense for us to not accept that. It’s too big for the parish to try to pull off, in terms of manpower or money.”

Beam said the parish initially went through the normal channel of the National Resource Conservation Service’s program, but after review, the agency determined it lacked the funding to do the entire project.

Aside from obtaining the necessary permits to access the laterals, the debris has to first be identified as being related to Hurricanes Laura and Delta. The Police Jury hired Tetra Tech to monitor what Crowder Gulf picks up and determine which debris is eligible for reimbursement by FEMA. The parish also contracted Crowder Gulf to collect roadside hurricane debris, with Tetra Tech monitoring that effort.

FEMA also has to agree that the debris is considered a flood hazard and could make future rain events more dangerous to residents, Beam said.

One of the first contracts the parish put out after Hurricane Laura was to get updated aerial footage of the parish and update its GIS mapping system, Beam said. A consultant was also hired to assess the drainage laterals to determine which debris points would be eligible for removal.

The parish also has to follow FEMA’s Environmental and Historic Preservation (EHP) review process, which involves consulting with Native American tribes. Fontenot said the tribes have 30 days for each lateral to respond and lay out any concerns. When FEMA Administrator Deanne Criswell visited Lake Charles Aug. 26, Beam said officials requested the window be shortened to 15 days.

“We’re trying to figure out whether we do it debris pile by debris pile, or a lateral,” Fontenot said.

“That’s what we’ve been working with FEMA on is how do we best present that to the tribes. That’s just one piece of the whole process. If you violate some of these rules, you don’t get reimbursed.”

Fontenot said the parish anticipates the tribes will also want archeological consults on some drainage laterals. Last week, the Police Jury approved the advertisement of a request for proposals for archeological services related to complying with the EHP review process.

Under the EHP, the parish also has to coordinate off-loading sites for the debris and access points into the laterals. The laterals also have to be prioritized, based on size and debris levels, Fontenot said.

Fonenot said the parish will also pick up debris from drainage laterals that isn’t eligible for FEMA reimbursement, yet still obstructs drainage.

Beam said the parish understands the public’s frustration with the amount of debris in drainage laterals, but this effort is going to take time.

“We did not have this level of debris after Hurricane Rita in drainage laterals,” he said.

Edwards declares State of Emergency in advance of Tropical…