Out of the shadows: With Kinsey, QBs have more to fear than just Chambers 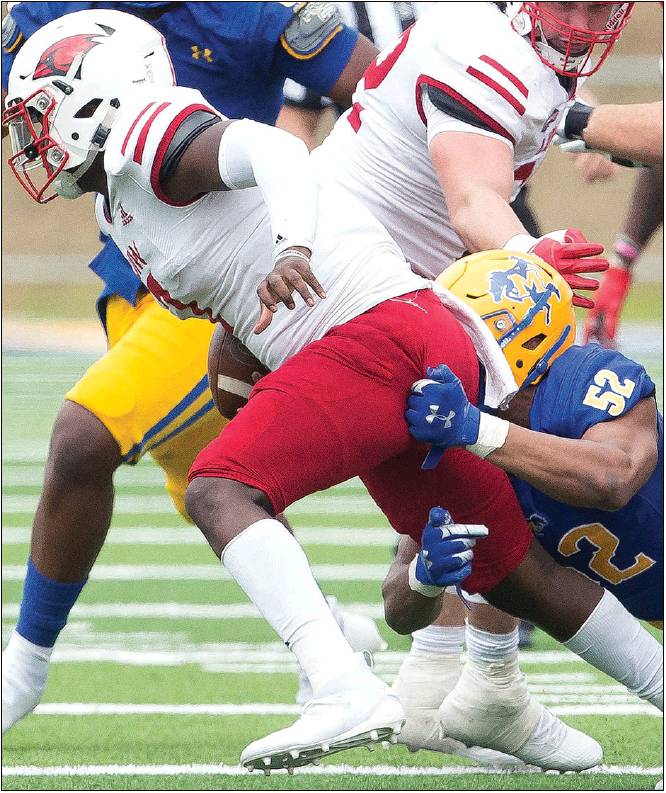 Rick Hickman / American Press Mason Kinsey can be overlooked because of the attention all-American Isaiah Chambers receives, but Kinsey has worked his way out of the shadows to keep pace with Chambers, giving McNeese State a formidable set of bookends to pressure quarterbacks.

At 6-foot-5 and 251 pounds Isaiah Chambers casts a long shadow on the football field.

And with all the accolades he has earned, the preseason all-American defensive end has that shadow reach off the field as well.

He is one of the best, if not the best, defensive football players on the Football Championship Subdivision level in the country. He was nominated for the Buck Buchanan Award, which goes to the top player in the division. He finished fourth in the spring voting.

But, on the other end of the McNeese State defensive line, Mason Kinsey has stepped out of that large shadow and is making a name for himself.

Despite being 3 inches shorter and 20 pounds lighter, Kinsey has proven he can run with the big dog.

“I admit, I look up to him,” said Kinsey, a redshirt junior. “He pushes me a lot. You have to work hard just to keep up with him.”

While Chambers was having an all-American spring season, Kinsey was gaining attention. He earned second-team honors in the Southland Conference and state of Louisiana.

Of course, Chambers was named the top defensive player on both teams.

“It’s great the attention he gets, he deserves it,” Kinsey said. “But he’s about the team just like me. We want to win and will do what it takes to do that.”

Perhaps not Chambers’ numbers but not bad either. And his play has gotten his partner’s attention.

“He has worked hard to get a lot better, a lot faster and a lot stronger,” Chambers said of Kinsey. “People know about him now. He gets double teamed some. We race to the quarterback in fun competition.”

Kinsey’s path to Mc-Neese was much different than Chambers’, but both got there by way of transfer.

While Chambers was going to Texas Christian and Houston, Kinsey was at Navarro College in Texas. This after earning freshman all-American honors by Phil Steele Publications after a solid first year at The Citadel.

“I wasn’t a big recruit, in fact McNeese was my only offer out of Navarro,” Kinsey said. “But I like it here. I have stayed because this has become home.”

It is also where he has found his own place to shine.

“This is a good defensive line that got better this fall with some of the new guys,” Kinsey said. “With Isaiah, we are competitive and we want to all get to the quarterback. We race to him but Isaiah is usually already there.”

Kinsey has earned the attention of quarterback Cody Orgeron.

“He is a physical specimen,” Orgeron said. “He has become very fast. He has really improved his game. He’s hard to block.”

Kinsey has also become hard to miss on the defensive line. He has even found a way to step out of the shadows of Chambers and into the spotlight.