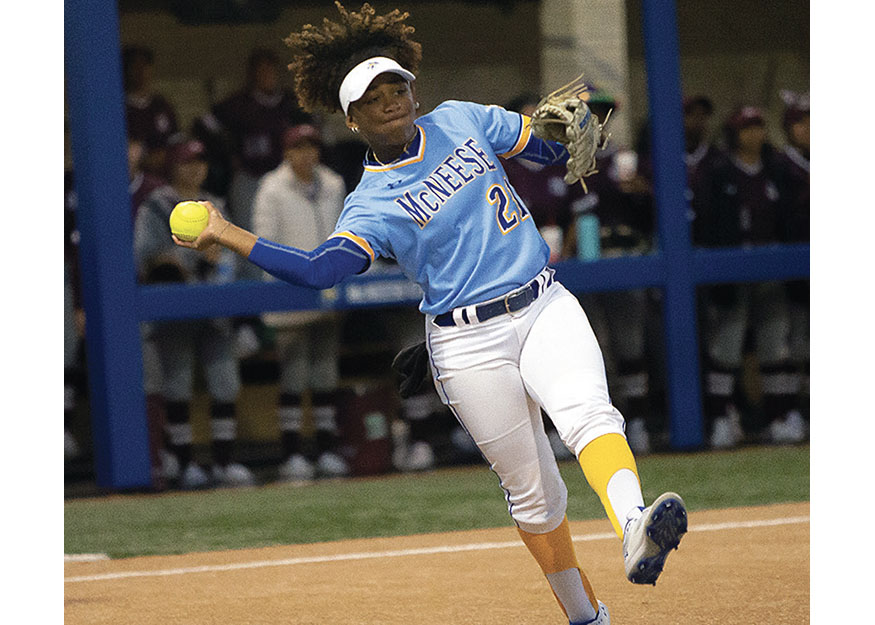 McNeese State junior Jil Poullard has learned how to be patient and know when to follow, when to lead and to never stop working at improving. (Rick Hickman / American Press)

Steady improvement and maturity has helped Jil Poullard take a leading role on the field and in the classroom for the McNeese State softball team.

Poullard earned first-team all-Southland Conference honors for her play on the field last season after hitting .367 with seven home runs and 45 RBIs. She was also named to the conference’s all-academic first team and has made the Commissioner’s Honor Roll in each of her first three seasons.

She attributes success in both areas to hard work.

“It is hard to become a college student-athlete and even harder to maintain it, but you learn to love the grind,” she said.

Poullard said the rewards are worth the effort it takes.

After starring in basketball and softball at Sam Houston High School in Moss Bluff, Poullard spent most of her freshman season as a reserve, starting two of 26 games in the 2020 season.

“That was really hard and mentally challenging for me,” she said. “But, I had a lot of growing to do. As I have grown and matured I realized that year helped me to get where I am. I learned how to know your role and be really good in it. If your job is to be in the starting nine, that is your role. If your job is being a really good teammate and being helpful where you can, that is your role. You always work while you wait.”

Help from elder teammates helped Poullard get through the year.

“You learn to work,” she said of the improvement made each year of her career. “If things are going well you work hard, and if things aren’t, you work even harder. You can never get complacent or content or the game will humble you very quickly.”

Poullard said she has become a student of the game.

“Learning the basics of my swing and breaking myself down to the core of every aspect has helped me to be able to grow from year to year,” she said.

As one of the elder members of this year’s team, Poullard is passing on the lessons she has learned.

“I try to let them know that they are bigger than the game,” she said of younger teammates. “Their identity outside of softball is most important, and they need to find that. Being an athlete, some people place so much of their pride in being a player, they forget to learn themselves outside of the sport. It’s important to encourage them and let them know that they will make mistakes, but it is OK. We’re still going to be friends and I’m still going to love you.”

Poullard said her work in the classroom is a result of maturing after reaching college.

“I have learned that I am so much more off the field and that has helped me grow as a person,” she said.

“In high school I didn’t take academics as seriously as I should have. Getting here and knowing that I can work just as hard in the classroom as on the field, and that it will feel just as good, has been fun. The person who came here in 2019 is not the same person that is sitting here in 2023.”

She added that her legacy won’t be her on-field accomplishments.

“I want to be a great teammate whether I am playing well or not,” she said. “I’m not going to be remembered as a statistic, but who I am as a person.”