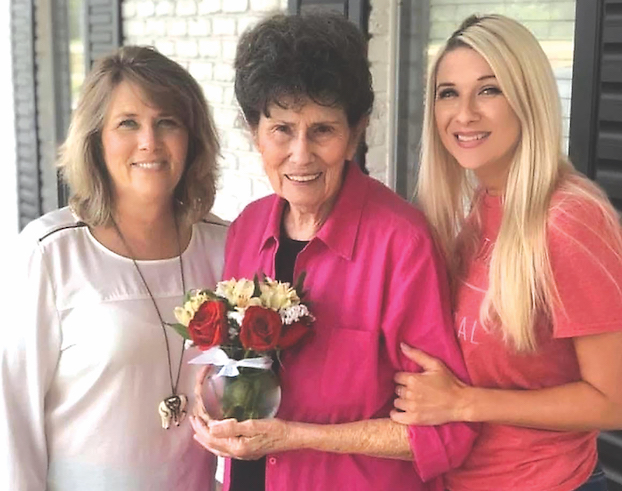 Lake Charles resident Tabetha Garrison is using today’s technology to collect and share family recipes from the past. The project allows her to pay tribute to the women who have stirred, kneaded and stewed in the kitchen before her, using recipes jotted down on a scrap of paper, torn from a magazine, found in one of their many church cookbooks, or oftentimes committed to memory long ago.

Garrison’s Great Aunt Bea Cooley Dunn Guillory (July 1916-October 2005) and Great Grandmother Malinda Jenette Cooley Dunn Heard Whatley (September 1914 – December 2005) were known as great cooks. They married brothers who died young, and the sisters opened Dunn’s Cafe in DeQuincy in the mid-1950s and early-1960s.
“Grandma Jenette went to work making pies in the back of the cafe for Aunt Bea, and bought the cafe sometime later,” Garrison said. “When the railroad men would get off work, they’d come in for a hamburger and when they finished it, they’d order a whole pie to take home.”

At night, Dunn’s Cafe was a hangout for high school kids.

“Grandma had a jukebox,” Garrison said. “But she wouldn’t let the kids dance in the restaurant, so they’d play a song inside and go outside to dance, jitterbug mostly.”

Whatley’s daughter Billie Jean Dunn LeBleu Brown – Mea (Me-uh) to her grandchildren – soon took over pie-making duties at the cafe. She wasn’t out of high school yet and remembers making as many as 40 pies at a time. Pies sold for $3 each or 50 cents a slice. After Brown married, she opened a daycare. Parents never had to worry about whether their children were well-fed and cared for.

“I remember her homemade pancakes were a big hit with her day care kids. Nobody makes pancakes like her.” (She separates the egg yolks and whites, beats the whites and folds them in.) “Of course everything was good, especially her roast, rice and gravy,” Garrison said.

Garrison’s Maw Maw Francis (Garrison) opened her own bakery in DeQuincy in the 1980s.

“When people realize I’m her granddaughter, they usually tell me they wish they could still get one of the solid chocolate eggs she made and decorated every Easter.”

Garrison’s mother, Mitzi LeBleu Wilkinson, valued her mother’s expertise. After she married and started cooking for her own family, she had to call her mother to find out how to make certain dishes. Wilkinson realized the importance of collecting those recipes jotted down on a scrap of paper, torn from a magazine or newspaper, found in one of many church cookbooks (maybe with tweaked or corrected handwritten notes)  and oftentimes committed to memory long ago. Wilkinson’s aunt,  Carol Heard, helped.

In 2012, Wilkinson dedicated the cookbook to Bea and Jennette Cooley who “loved cooking, spending time with family and serving others….Some of the recipes are treasured family favorites and some are new; however, all reflect the love of good cooking.”

That sentence could have probably ended with the word love. Few would doubt that these women demonstrated their love with food. Garrison does.

“It gives me so much happiness to feed my family and have them enjoy it,” she said. “It’s like my love language. Just like I connect certain memories to family and food, my kids are connecting special memories and moments with their mom and food.”

Check out Garrison’s food blog by going to www.sweettsrecipes.org or get the Pepper app and go to @tabethag.