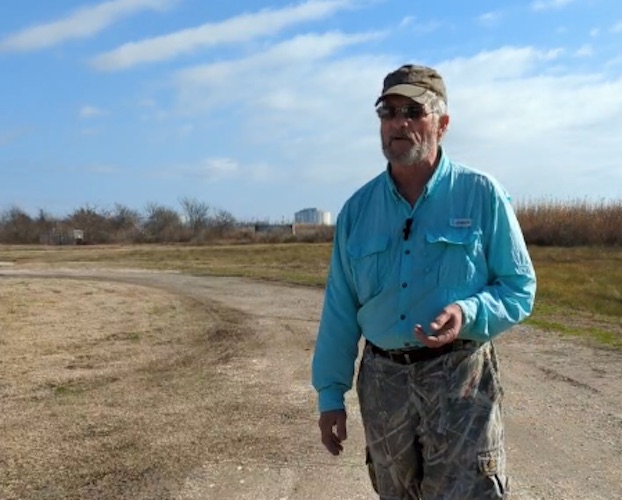 John Allaire is a retired environmental engineer with BP and Amoco and a 25-year Cameron Parish resident.

Considering plans to build or expand another 13 export terminals in Louisiana, the report raises concerns from area residents, fishers and shrimpers that the proposed construction of additional gas export terminals will turn the coast of Cameron Parish into an industrial wasteland, the group said.

“In between these two facilities is Calcasieu Lake, which is a valuable fishing ground for generations,” said Louisiana Bucket Brigade Southwest Louisiana Coordinator James Hiatt. “I remember coming here when I was a kid. We’d come down here to the Gulf Coast to the Cameron jetties to fish. There used to be a pier and two large boat docks, but all of that has been handed over to those companies.”

Hiatt said Sempra and Venture Global have been cited by the Environmental Protection Agency and regulatory agencies for underreporting and not reporting harmful emissions.

“These facilities continuously have problems with their thermal oxidizer, a piece of equipment necessary to combust these hydrogen carbons so they’re not released in the atmosphere,” Hiatt said. “We’re talking about benzene, which is a known carcinogen that causes respiratory distress, and we’re talking about carbon monoxide and thiophene and other volatile organic compounds that are regularly released into the atmosphere that effect everybody and has significantly contributed to the air quality in Cameron Parish.”

Hiatt said there is a continual “huge flare” coming from the Venture Global facility.

“Some nights you can read your paper from it because it’s so bright,” he said. “They said they would only flare a few times a year and yet we see they are continuing to flare, which indicates there are problems still at the facility that are not being reported.”

Hiatt  — who has more than a decade of experience working in the petrochemical industry as a ship agent, a dock worker, a tank farm operator and a laboratory analyst — said Cameron LNG has had its thermal oxidizer trip 48 times since July 2019.

“Almost once a month there, this thermal oxidizer trips and they have released 3,608 pounds of benzene, 23,000 pounds of methane and other volatile compounds,” Hiatt said.

Travis Dardar, a local fisherman and shrimper in Cameron Parish, said the LNG facilities along the Gulf Coast are destroying his livelihood.

“They have sacrificed the fishing for bigger business; they have no consequences and they have no remorse,” Dardar said. “This land was built by the blood, sweat and tears of our forefathers — not LNG, not natural gas. This has been an absolute nightmare for the people of Cameron and we’re tired of it. This is wrong.”

Dardar said the life of a fisherman is fading.

“If they continue to build more facilities here, it will be the end of commercial fishing,” Dardar said.

John Allaire, retired environmental engineer with BP and Amoco and a 25-year Cameron Parish resident, said though Cameron LNG and Venture Global say they are providing clean energy, nothing could be further from the truth.

“Venture Global last year did their maintenance dredging for their big ships and in November, December and January they put in a pipeline and they pumped all that sludge that settled out of their drainage basin into my beachfront. The entire beach front was knee-deep with this black sludge with a sulfurous odor to it,” Allaire said. “The entire beach was covered with it until September when we had this mini storm that removed it and put it further offshore. It’s still out there and now we’re having these sludge balls that are anywhere from golf ball to softball size coming on shore. The National Oceanic and Atmospheric Administration stopped it but now their plan is to pump this ooey, gooey sludge into the Cameron National Wildlife Refuge. There’s nothing that can live in this stuff.”

Allaire said in addition to the flare, Venture Global has continual alarms blaring.

“It’s like something you hear on ‘Star Trek’ warning the crew that something’s not right,”  Allaire said. “I hear these alarms two or three times a week.”

He said Venture Global also creates its own weather pattern.

“You’ll see no clouds in the sky anywhere and then you’ll see this big cloud coming off the facility and whichever way the wind is blowing, it streams off that facility. Those are the pollutants coming out and mixing with the clean air.”

Hiatt said the plan to concentrate so many gas terminals in one area “shows a great disdain for the people who love south Louisiana.”