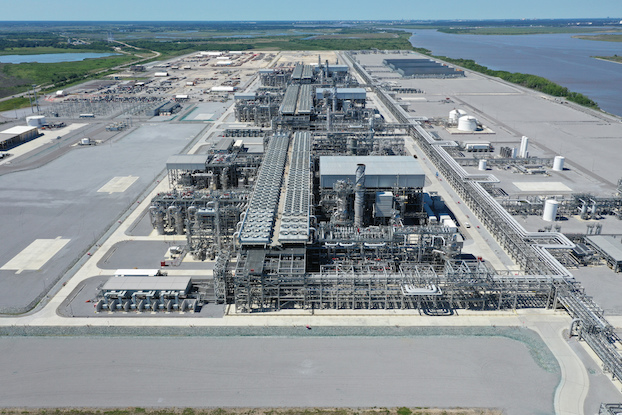 The Cameron LNG liquefaction export project in Hackberry, Louisiana reached full commercial operations in August 2020. The project includes the first three liquefaction trains that will enable the export of approximately 12 million tonnes per annum of LNG, or approximately 1.7 billion cubic feet per day. (Special to the American Press)

“Entergy Louisiana is a critical partner in our efforts to reduce our overall direct and indirect GHG emissions. Cameron LNG strives to provide its customers with LNG that has the lowest possible emissions intensity,” said Whit Fairbanks, president of Cameron LNG. “The MOU we have signed allows us to memorialize an agreement to bring on enough renewable power to offset the emissions for our facility, including the Train 4 expansion, when all renewable generations phases are added to the supply portfolio.”

“We’re proud to partner with Cameron LNG on this agreement,” said Phillip May, Entergy Louisiana president and CEO. “Our customers are continuously seeking carbon-reduction options, and this is another example of us working with an industry leader to meet their own goals as well as our own.”

The MOU is non-binding and sets forth a framework for Entergy Louisiana and Cameron LNG to finalize and sign a minimum 20-year long-term agreement for the procurement of new renewable generation resources in Louisiana over an agreed-upon timeframe, subject to the ultimate approval of the Louisiana Public Service Commission and Cameron LNG. The new electric service agreement is expected to be developed together with a new, renewable tariff option that will be filed for commission review and approval in the coming months. This new tariff along with Entergy Louisiana’s recently approved optional Geaux Green tariff program will provide customers the opportunity to reduce their scope 2 emissions by subscribing to new renewable generation resources, according to a press release from Entergy Louisiana.

Cameron LNG, a 13.5 million tonnes per annum (Mtpa) liquefied natural gas export facility operating in Hackberry, is working with its joint venture partners to develop a cost-effective and lower-emission potential expansion of the facility.

The proposed Cameron LNG expansion would include an additional liquefaction train with a maximum production capacity of approximately 6.75 Mtpa that is planned to utilize electric compression, equivalent to adding approximately 300 megawatts (MW) of demand to the Entergy Louisiana system.