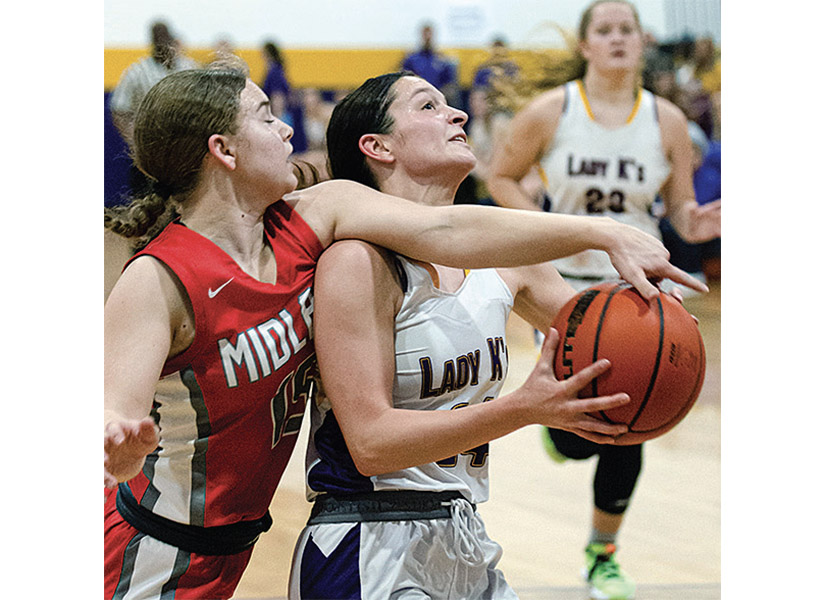 LONGVILLE — After an hour-long delay to the start of the game and a slow start, South Beauregard straightened things out to pull away for a 59-41 win over Midland Tuesday night in a high school girls basketball game.

The Lady K’s started 1-for-6 from the field with three turnovers and trailed 10-4 after a bucket in the lane by Midland’s Tara Savoy.

Then it was as if South Beauregard (6-2) flipped a switch as it didn’t commit another turnover until there was 2 minutes left in the second quarter. By that point they had turned a six-point deficit into a seven-point lead to extend its win streak to six since starting the season 0-2.

“They share the basketball and see each other. Sometimes we will touch the ball four times before we shoot. That was not always our strong point. We are always just a running team, and we could score off of our defense. Now we have the post, we have the guards, so we can actually run a play — we don’t like to — but when we need to we will.”

The game was delayed from its 6 p.m. start after game officials had to take an alternate route to the game because of an accident.

Raelyn Gunter hit a bucket in transition with 2:55 left in the first quarter to cut the Rebels’ lead to 10-9, and Jalyn Williams scored on a fast break on a feed from Emorie Fontenot to take an 11-10 lead. Williams scored a game-high 17 points. Guard Jaden LeBoeuf added 12 points, and forward Kenzie Hudler finished with 12.

The Rebels got the lead back one more time, 12-11, on a layup by Caitlyn Boudreaux, but the Lady K’s held them scoreless for more than 2 minutes to spark an 8-0 run. South Beauregard took the lead, 13-12, for good on a fast-break basket by Kaelyn Gunter with 1:23 left in the first quarter, then steadily built that lead to 33-23 at the half to break Midland’s (13-4) nine-game win streak.

“Defense has been our saving grace,” Johnson said. “We spend most of our practice on defense.