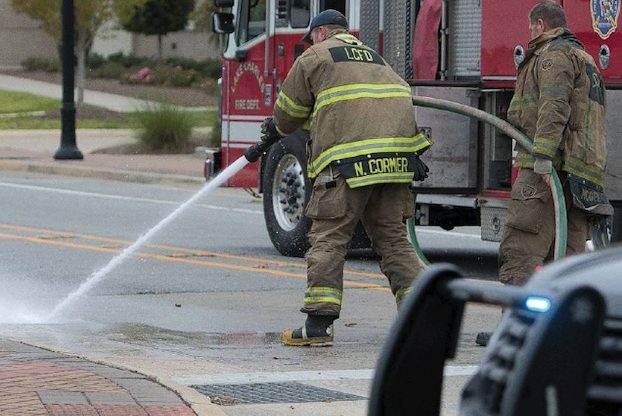 Joey Julian, accused in a 2017 fatal shooting at the intersection of Mill and Ryan streets, pleaded guilty to manslaughter on Wednesday just as a jury was being seated for his trial in 14th Judicial District Court.

The Baton Rouge man shot 38-year-old Ernest Samuel Miller of Lake Charles multiple times on the afternoon of Nov. 8, 2017. After the shooting, then-Lake Charles Police Deputy Chief Mark Kraus told the American Press that Julian fled in a local resident’s vehicle before being apprehended by Louisiana State Police troopers on Interstate 10 just east of the Atchafalaya Basin bridge. Kraus said at the time that Miller and Julian were acquaintances.

Miller sustained two bullet wounds, “one to his arm and one that traveled through his back, and I believe that one pierced his heart,” Lake Charles Police Det. Willie Fontenot testified at Julian’s 2018 bond hearing.

The case has been in and out of the courtroom for five years as witnesses were questioned, motions to reduce Julian’s bond were filed and ultimately Calcasieu Parish District Assistant District Attorney Jason Brown was fired after he failed to inform Judge Ron Ware that Julian’s defense team was adamantly opposed to a trial continuation he requested.

Sentencing for Julian has now been set for March 1, 2023.

Todd Clemons and Adam Johnson, defense attorneys for Julian, said in a statement to the American Press they were “pleased” to have taken “significant step towards a final resolution in this complex matter.”

“It has been our pleasure to zealously represent Mr. Julian and defend him against the false accusation of murder,” the pair said. “Yesterday, after two intense days of jury selection, the District Attorney’s Office approached us with a very attractive offer to get this matter resolved. We have maintained all along that Mr. Julian killed Ernest Miller but he did not murder him. Joey Julian acted in self-defense.”

The pair said the elimination of the possibility of a second-degree murder conviction — which carries a mandatory life sentence  and — the withdrawal of the firearm enhancement —which requires a minimum sentence of 20 years on a manslaughter conviction — as well as the dismissal of the five companion charges was an offer that Julian could not refuse.

“We realize that this matter has been extremely difficult for Mr. Miller’s family as well as the Julian family,” the pair said. “We look forward to the sentencing on March 1 and the beginning of the healing process for all involved.”