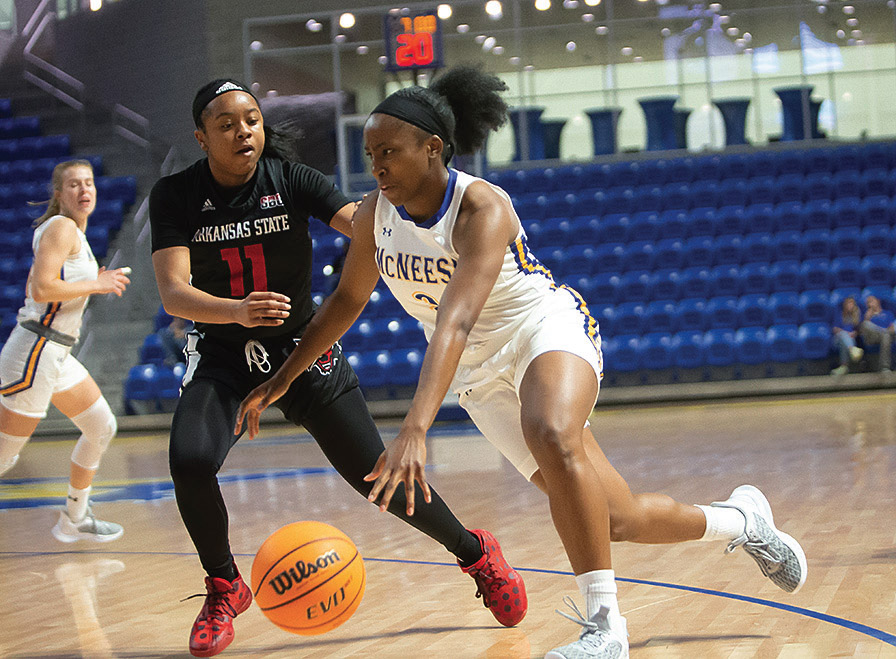 With a two-week break before the holiday, the Cowgirls’ coach said he hopes his team can get healthy during that stretch.

Suffering from both illness and injury, the Cowgirls were no match for the Red Wolves, who pounded the Cowgirls 102-83.

The loss was the sixth straight for McNeese (1-6). A-State improved to 4-3 with its best scoring output of the season.

“We got away from our game plan early,” Kennedy said.

The game was essentially over after the first quarter as the Red Wolves made 16 of their 21 shots from the floor (76 percent), including 7 of 9 from 3-point range.

That led to a 42-19 lead for the visitors, who never looked back. It was the fifth consecutive win for A-State over the Cowgirls.

It was the most points given up in a quarter by a Kennedy-coached McNeese team.

“You can’t have a quarter like that,” Kennedy said. “I like how we turned it around but you should not should not be blasted like that early, especially at home.”

After the opening 10 minutes the Cowgirls outscored A-State 64-62, for those keeping score.

McNeese cut the lead to 78-65 early in the fourth on Paris Mullins’ driving layup with 9:41 remaining. But the Red Wolves responded by scoring nine of the game’s next 11 points to end all doubt.

“I like how we played in the second and third quarters, we battled and got back to the plan,” Kennedy said. “We just have to get healthy right now and get our legs back.”

Mullins led McNeese with 20 points in her first game back after missing the last four. Divine Tanks added 17.

Keya Patton led Arkansas State with 20 points as the Wolves made 11 3-pointers to McNeese’s three.