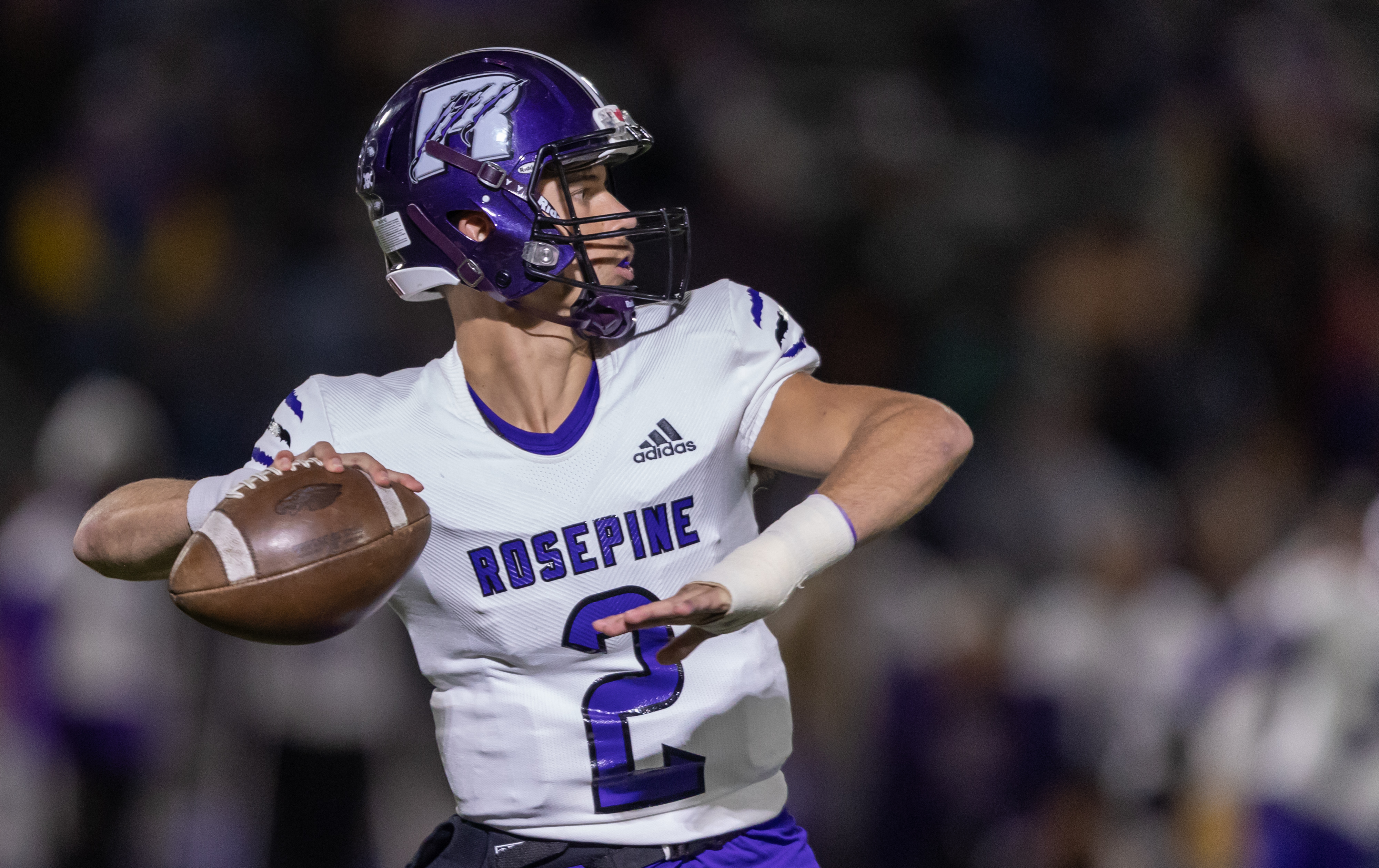 Rosepine’s Jake Smith threw a touchdown pass in the first quarter of the Eagles 14-7 loss to Many in the non-select Division III quarterfinals. (Kirk Meche/American Press File Photo)

ROSEPINE — Top-seeded and undefeated Many rallied in the fourth quarter to end No. 9 Rosepine’s upset bid in a 14-7 Division III quarterfinal win Friday night.

The Tigers scored the winning touchdown with 1:51 left on a 1-yard run by quarterback Tackett Curtis.

The Eagles (10-3) scored on the opening drive, converting a trio of fourth-down plays, the third of which was a 5-yard touchdown pass from Jake Smith to Aden Cline to take a 7-0 lead.

The touchdown was the first score against the Many defense since Week 6 of the regular season. The Tigers had shutouts in each of their previous four games.

“Our game plan coming in was to run right at them,” Eagles head coach Brad Ducote said. “We were going to use four downs when we got past midfield, we knew that coming in. We got two first downs on fourth-down plays, put together a good drive and scored. It could not have gone any better game plan-wise.”

Many couldn’t sustain anything on offense through the first three quarters, but tied the score with 7 minutes left on an 8-yard run by Jamarlyn Garner.

“They are good at running the ball,” Ducote said. “We talked to the kids all week about keeping their eyes right, being where they needed to be and tackling well.

“They did that. We made them earn everything they got. The kids played great.”

Many went into the game averaging 41 points, but was stifled for most of the game. The Tigers fumbled the ball away on their opening drive, but the Eagles did not convert the turnover into points.

Cline starred on special teams in the first half, kicking the extra point after his touchdown and twice pinning Many inside its own 5-yard line with punts.

The Eagles held Many to two first downs in the half. Jake Smith intercepted a Many pass early in the fourth quarter.

Last year Many ended Rosepine’s season in the quarterfinals, winning 50-12 at home. The Tigers have reached the semifinals for seven consecutive seasons.