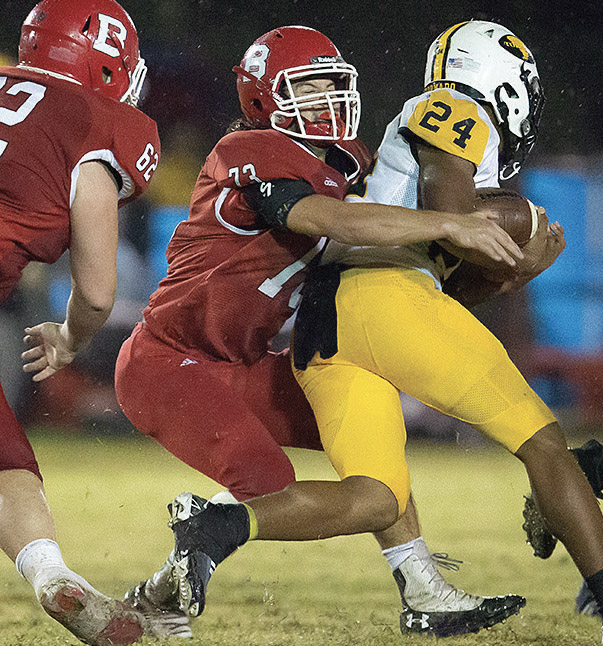 BASILE — The fifth-seeded Haynesville Golden Tornado broke open a close game in the third quarter to take a 31-7 win over the fourth-seeded Basile Bearcats in the Division IV quarterfinals.

Haynesville advanced to the semifinals to face Oak Grove.

“I’m so proud of our team and they always fight even down in this game they kept on fighting, and we do it the right way,” said Basile head coach Kevin Bertrand. “I’m really going to miss this senior class as they became the true leaders of our teams. This is one of the most enjoyable teams I’ve had as a coach.”

Haynesville (10-2) led 7-0 at the half, but a big third quarter by Jayden Green put the game out of Basile’s reach. The Golden Tornado scored 21 points in less than 4 minutes.

Green scored three of his four touchdowns in the third quarter. His first score was an 11-yard run with 7:13 to play.

Green’s next touchdown came on a 62-yard punt return with 5:16 to play. His third touchdown of the quarter came when he intercepted a pass and returned it 43 yards with 3:37 to play in the quarter.

“We knew how good he was, and they were on offense as we had seen it on film,” Bertrand said. “We fought hard all game and I’m proud of my team.”

Basile gained excellent field position on the Haynesville 33-yard line after a Toby Franklin fumble with 8:56 to play in the first quarter. The Bearcats drove to the 6-yard line. The Bearcats attempted a 22-yard field goal, but it was wide right.

The Bearcats’ lone score came with 2:15 left in the game when Horace Edwards scored on a 1-yard run.

“We knew they were a great team as they can score quickly like they did,” Bertrand said. “I’ve very proud of our defense as they fought all night as their guys were bigger, stronger, and faster than us.”