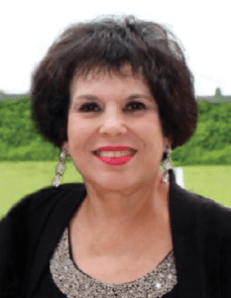 Sharon Brown Hanchey was born on May 24, 1942, in Baton Rouge, La. Shortly after her birth, her father, Sammie Brown, was shipped off serve in World War II. During his four years of deployment, Sharon and her mother, Melba Cruvant Brown, went to St. Louis, where they stayed with Sharon’s grandparents, Anna and Dave Cruvant, whom Sharon referred to as her “Grandpa Daddy.” When Sammie returned from the War in 1945, Sharon exclaimed, “That’s my Sammie Daddy!”
Her exceptional intelligence led Sharon to become a scholar, majoring in education at LSU, and earning a Master’s Degree plus 30 at McNeese State University. She taught French and English at Sulphur High School until her retirement in 1985. Her students remembered her as being a great teacher – tough but effective. After retiring, Sharon resumed her other passion – Bridge. She became a Life Master and earned numerous points, becoming a tournament Bridge player. She taught many students Bridge locally, as well as on cruise ships. An avid game player, Sharon also taught Mahjong and Mexican Train.
But her proudest achievement was her family, including her beloved husband of 48 years, Carl Harmon Hanchey; daughter, Lisa Diane Hanchey; son, David Harmon Hanchey; grandchildren, Brian Harmon Hanchey, Scott Leon Hanchey and Kristen Ellen Hanchey, and great-grandchildren, Peyton Marie Hanchey, Nora Beth Hanchey and Lola Kate Hanchey.
She enjoyed preparing meals for her family, and she was such a fabulous cook that she had recipes published in cookbooks. She also was a test cook for Pirate’s Pantry while a member of the Junior League of Lake Charles, where she also volunteered for the Literacy Council.
Sharon also loved to travel, and she saw the World with Carl, fondly recalling trips to Australia and New Zealand; Scandinavia; St. Petersburg, Russia; England, France, Germany, Bermuda, Canada and her last vacation with Carl around South America. She enjoyed live music, seeing legends like Tony Bennett, Liza Minelli, Frank Sinatra, Tom Jones, Garth Brooks and her favorite – Elvis. Sharon will always be remembered for her beauty, brilliance and sharp wit and, most of all, her enduring love for her family.
She was preceded in death by her parents, Sammie Brown and Melba Cruvant Brown; and her husband, Carl Harmon Hanchey.
She is survived by her daughter, Lisa Diane Hanchey; her son, David Harmon Hanchey (Roberta); brother, Dr. Randall Leon Brown (Debbie); grandchildren, Brian Harmon Hanchey (Ruth), Scott Leon Hanchey (Laura) and Kristen Ellen Hanchey; great-grandchildren, Peyton Marie Hanchey, Nora Beth Hanchey and Lola Kate Hanchey; and nieces Ashley Brown Smith, Allison Brown Kruse (Hank) and Kimberly Brown Smith (Landon).
Her funeral service will be held at First United Methodist Church in Lake Charles on Friday, Nov. 25, 2022, at 12 p.m. The Rev. Weldon Bares will officiate. Interment will take place in Prien Memorial Park Cemetery following the service. Visitation will take place at the church on Friday from 10 a.m. until the time of the service.
The family would like to give special thanks to Acadian Hospice, Heart of Hospice, and Tammy Dumond for their excellent care. In lieu of flowers, donations may be sent to First United Methodist Church in Lake Charles or Louisiana State University.
Words of comfort to the family may be expressed at www.johnsonfuneralhome.net.