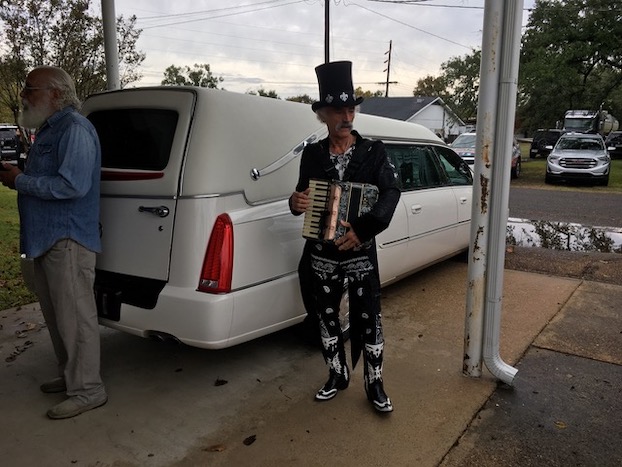 Retired Fort Polk Fire Chief Michael Kuk has spent most of his life admiring and honoring the work of rock’ n ’roll legend Jerry Lee Lewis — and on Saturday Kuk paid the ultimate tribute to the music legend by performing at Lewis’ funeral services.

As the doors of Young’s Funeral Home in Ferriday opened on Nov. 6 and Lewis’ casket was carried out, Kuk stood next to the waiting hearse and offered his own arrangement of “Amazing Grace” from his Zydeco accordion. Dressed head to toe in swamp pop royalty attire, Kuk’s was the only music to be played live during the entire funeral service.

“It was the greatest honor of my life as a musician. An absolutely incredible experience,” Kuk said.

But Kuk’s true passion is music, and it is one that was inspired by Lewis.

A trained cathedral organist, Kuk’s signature sound is the Hammond organ, but he admits it was hard to expand his love for music with just a keyboard. At least, not before he discovered Jerry Lee Lewis.

A man considered by many to be the greatest rock’ n’ roller of all time, Lewis pioneered the music genre with the keys of a piano and inspired a young Kuk to explore his own talent in a new way.

“What he did with a keyboard, it became a guiding light to me and allowed me to really explore my talent and find a way to express myself,” Kuk said.

Kuk went on to enjoy success with his music. Today, he performs at funeral services for veterans and first responders, and serves as the ceremonial musician each year at the International Association of Fire Chiefs annual conference.

It was after one such conference in New Orleans in the late 1990s that Kuk traveled to the Jerry Lee Lewis museum and met Lewis’ two sisters. The trio became fast friends and their conversations all those years ago led to Kuk performing his “Cajun sendoff” at Lewis’ funeral.

After the funeral, Kuk was invited by Lewis’ nieces to the private cemetery where Lewis was laid to rest and Kuk was asked to perform several more times for the family and close friends.

“The whole weekend was a tremendous honor for me as a musician, and I have that surreal sensation and treasured memory of being able to share my talents in a special tribute to the legend that inspired me. It was incredible. I don’t think there is any other word in the English language that I could use to describe that moment,” Kuk said.

Before leaving Ferriday, Kuk presented to Lewis’ nieces his own collection of rare early Jerry Lee Lewis recordings kept in mint condition from Kuk’s youth so that they could be included in the Jerry Lee Lewis museum.

“They were recordings that I have held on to since I was a teenager and are special to me, but I thought they would be better suited going in the museum to add another important aspect of Jerry Lee’s music and legacy,” Kuk said.

In return, Kuk was surprised with a gift of sealed, vintage 7-inch 45 RPM recordings of four songs from Lewis’ early career days.

“There simply are no words to describe any of this. These are memories and items that I am going to treasure for the rest of my life,” Kuk stated.