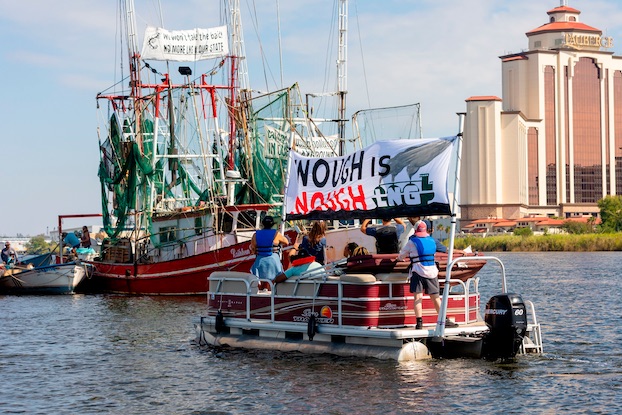 A flotilla of shrimping and fishing boats on the Calcasieu River delivered a message to the liquefied natural gas industry that they will protect their homes and their livelihoods from destruction. With a banner that said, ‘We Won’t Take the Bait: LNG Out of Our State,’ the fisherman delivered a message in sight of the Golden Nugget Casino, where oil and gas industry executives celebrated record profits at the LNG Americas LNG & Gas Summit and Exhibition.

“We’re here to protect our homes, our livelihoods, and our families,” said Travis Dardar, an indigenous fisherman and shrimper from Cameron who led the flotilla. “Companies like Venture Global build these massive gas export terminals that fill our fishing grounds with concrete, poison the seafood in our waters, and make our homes unlivable – and they expect us to just sit there and take it? Hell no. I’ve been a fisherman all my life, and so have most of us here, and ain’t no way we’re gonna let them destroy our way of life.”

Since the federal fossil fuel export ban was lifted in 2015, the Gulf Coast has boomed with new and expanded facilities. As a result, fishers and shrimpers in the area have seen dredged riverbeds, contaminated waters, depleted stocks, and grave financial consequences for their livelihoods.

“This is way more catastrophic than any hurricane,” said Dardar, pointing out that people can rebuild after a hurricane – but they can’t replace wetlands once concrete pads have been built in their place.

Dardar said he met with a staffer at Louisiana Wildlife and Fisheries, who told him studies on the effects on fish after the facilities are built.

“It’s sad that we’re getting this shoved down our throat. It’s wrong,” said Jimmy Dison, a Cameron shrimper who’s been lived and fished in Cameron his whole life and helped lead the flotilla.

“Our parish government don’t give a damn,” Dison said. “They don’t ask nobody nothing. It ain’t home no more because of what they’ve done to our little town. They lied to us and told us it’s gonna help the town. That’s bull. It helped a few people…I’ve been through it for 60 years. I’ve seen a lot of changes. They’re sure shoving a lot down our throat.”

Dardar and the fishers and shrimpers were joined Wednesday by former oil and gas workers, local residents, and people from across the Gulf of Mexico concerned about the rapid buildout of liquid natural gas export terminals along the coast.

“What happens in Lake Charles in the next four years will determine what happens to the world in the next 40,” said James Hiatt, a former oil and gas worker and current Southwest Louisiana Coordinator with the Louisiana Bucket Brigade. “By building more export terminals, these industries destroy our homes, raise our energy bills by exporting our gas and forcing countries to compete for limited supply, and lock us into decades of fossil fuel dependence. It’s time to choose a different future for Lake Charles and the world.”