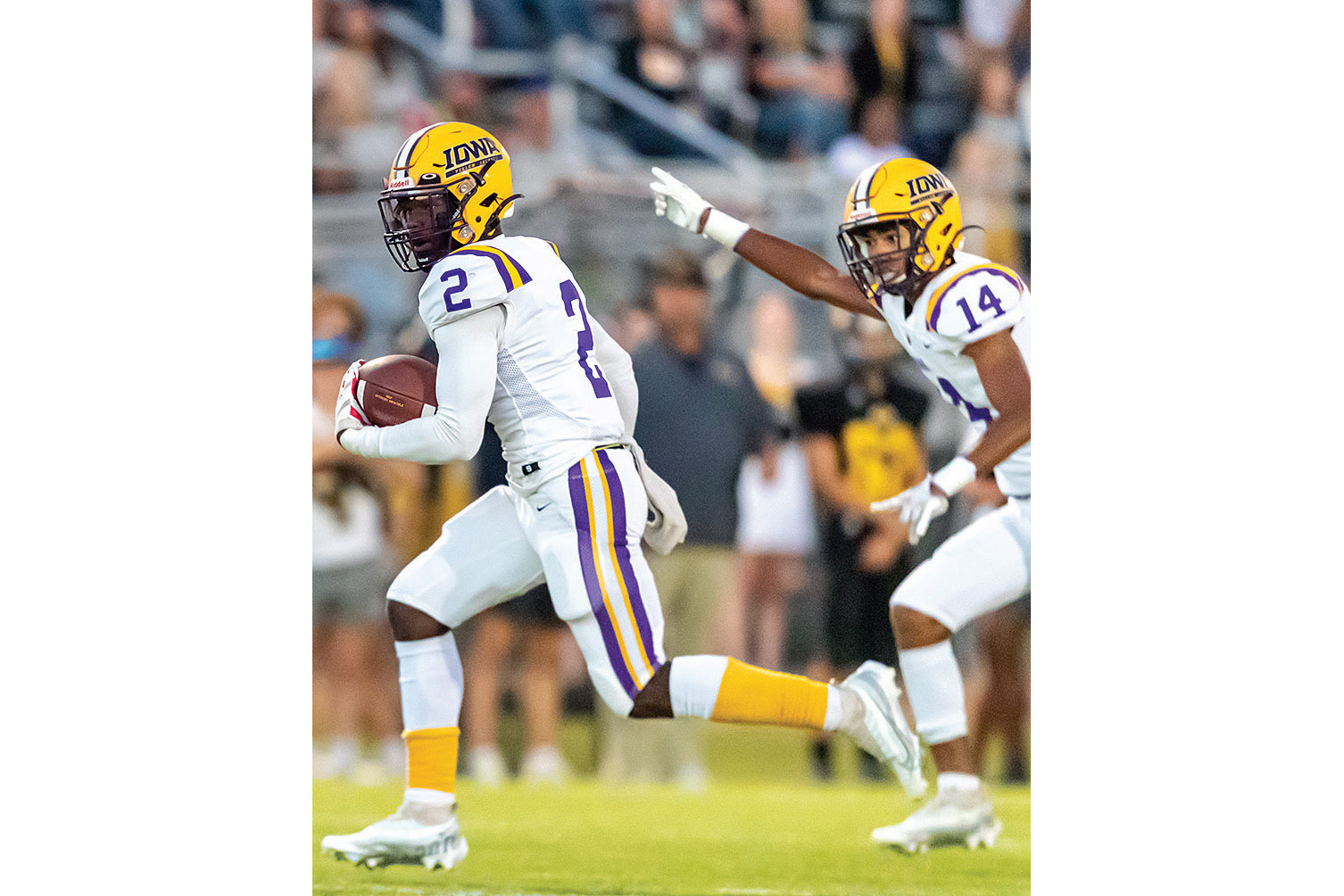 Iowa running back Ronald Young scores a touchdown against Kinder during a District 3-3A game Friday night at John C. Buck Stadium in Kinder. (Dennis Babineaux / Special to the American Press)

KINDER — The Iowa Yellow Jackets defense stood tall all game in taking a 28-0 shutout victory over the Kinder Yellow Jackets Friday night in District 3-3A action.

Iowa wasted little time getting points early after gaining excellent field position off an opening-drive fumble by Kinder. The first drive took three plays before Ronald Young scored on a 27-yard run for a 7-0 lead.

Iowa wasted little time putting points on the board on its second possession. A 36-yard pass from Cole Corbello to Johnathon Walker put the ball on the Kinder 2-yard line. One play later Young scored his second touchdown of the first quarter to give Iowa a 14-0 lead.

Young scored his third touchdown of the first half early in the second quarter. He scored on a 45-yard run with 7:32 to play give Iowa a 21-0 lead.

Iowa’s defense scored on the next drive when it forced a Graham Fawcett fumble. Hayden LeBlue returned the fumble for a 10-yard score with 6:50 to play in the second quarter.

“I couldn’t be prouder of our defense tonight as Kinder has a difficult offense to defend and has us worried all week,” said Iowa head coach Tommy Johns. “I thought our guys did a great job executing as that is something we preached all week was effort and execution.”

Iowa looked to increase the lead in the opening drive of the third quarter. Young fumbled the ball on the Kinder 1-yard line which was recovered by Davion Matthews with 7:07 remaining.

“I thought we did a great job in the first half offensively and the second half we turned in over at the 1-yard line going in and those things will have to get cleaned up moving forward,” Johns said.

Kinder threatened to score in the final minute but a holding penalty call negated a touchdown.

“Ronald Young played well, and our offensive line blocked well up front,” Johns said. “The first half our offensive staff had a great plan that we were able execute but not as well in the second half.”