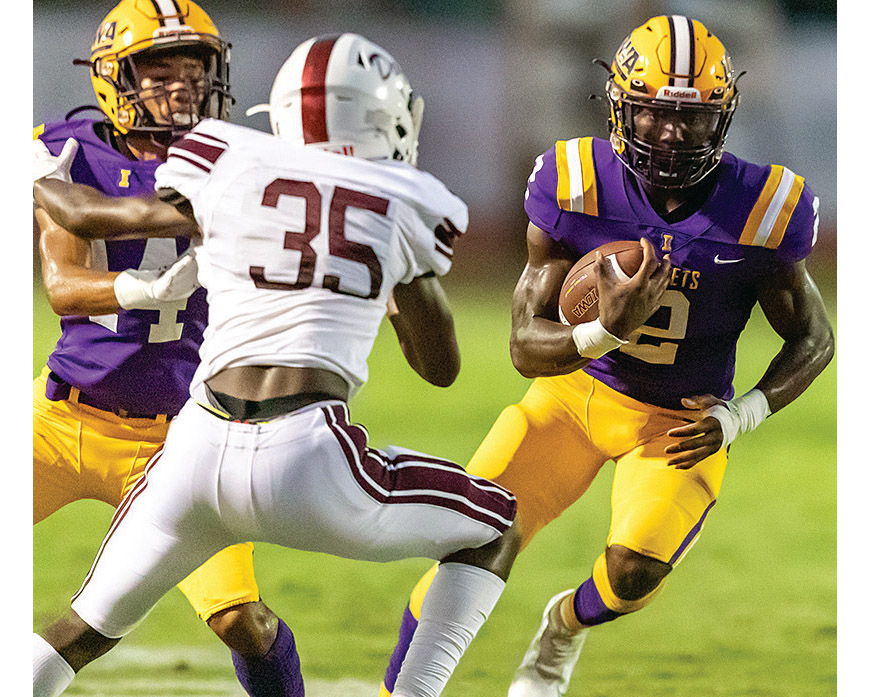 The Yellow Jackets’ Ronald Young gets a first down against Jennings during a District 3-3A game Friday night at Iowa High School. Young scored twice and ran for 124 yards. (Dennis Babineaux / Special to the American Press)

IOWA — The Iowa Yellow Jackets put away a close game early in the fourth quarter Friday night in taking a 36-22 victory over the Jennings Bulldogs in District 3-3A action.

Young finished with 124 yards rushing on 19 carries and made one reception for 26 yards. Kyndon Brass led the receivers with three receptions for 86 yards. Corbello finished 10-for-15 passing for 202 yards and rushed for 63 yards on eight carries.

The Yellow Jackets answered on their second drive when they gained the 8-7 lead on a 28-yard pass from Corbello to Bass with 7 seconds left in the quarter.

Iowa looked to increase the lead with 5:45 to play in the second quarter on a long completion from Corbello to Markel Montgomery but turned the ball over at the 1-yard line on the next play.

Jennings took advantage of the turnover and scored six plays later. Benoit completed a 70-yard touchdown pass to Zeno to give Jennings a 14-8 lead with 1:14 to play in the second quarter.

The Yellow Jackets regained the lead at 15-14 before the halftime break with a 26-yard touchdown pass from Corbello to Young with 21 seconds left in the first half.

Iowa scored another touchdown early in the third quarter when Corbello scored 1-yard run with 6:43 to play.

Jennings’ lone score in the fourth quarter was a 90-yard kickoff return by Wyatt Fontenot with 7:28 left.

“I thought we relaxed and played a lot better defensively in the second half,” Johns said. “The biggest thing we preached to our kids was to make them earn it. We gave up three big plays in the first half which hurt, but we had to relax and get back in and start playing.”