As far as this week’s LSU game with New Mexico goes, here’s all you need to know about how important it is:

Even in this day and age, it won’t be on your normal TV. It will be shown on SEC Network+ and ESPN+, which are both code words for “streaming,” which is defined in the dictionary as “an exercise in jumping though one computer hoop after another until you finally click one too many fruitless links and your fist destroys whatever size screen you paid good money for.”

So I’ll spare you the big scouting report on New Mexico and why the Tigers might fear the Lobos. Some light research has determined the school is in Albuquerque, the colors are silver and cherry (red) and that Lobos were never a native-American tribe that might run the school afoul of the politically correct mascot police.

The last part surprised me. But it turns out a Lobo is a Spanish word for some variation of wolf, and before the school adopted it, the poor football lads were known as the New Mexico University Boys (later amended to the even more mundane “Varsities”).

Beyond that, I can’t help you much — and the truth is nothing LSU does this week against the Lobos can help the Tigers get back into the national discussion.

But make no mistake, this is a big week in LSU football.

It is the “purple game.” The “purple game” is an officially designated, department-santioned LSU game each year, generally the first home game that isn’t the season opener and isn’t a Southeastern Conference game and, most importantly, doesn’t fall in a month ending in “y” or “e.”

The “purple” should be the big tip-off here, as apparently this will be LSU’s annual attempt to turn Tiger Stadium purple as the sun finds that familiar home in the western sky.

At current ticket prices, let alone the traffic challenges, personally I think fans should feel free to wear whatever color they dang well please. Even pink for the truly rebellious.

Remember, it’s just a fashion option, not a civic duty. But, at any rate, fans in attendance should dress their conscience.

On the other hand, the purple game is also the warning that the LSU team, the players themselves, will not have that option.

I don’t have any inside information here, but in all likelihood they will toss aside the gorgeous dress whites and be clad in purple jerseys. Seems to happen every year.

This is an enforced error, of course. And never mind that nationwide LSU’s traditional look is on the short list for snazziest fashion statements in football.

Mainly, it does a disservice to all the former Tigers who suffered through most of the 1980s and well into the 1990s. They were forced into a never-ending fashion faux pas thanks to a busy-body NCAA decree that specified dark jerseys for home teams.

The logic was never explained. That’s how the NCAA works.

So, there was much blood, sweat and tears expended for oh so many years before then-head coach Gerry DiNardo finally shamed the NCAA out of the fashion police business. He deserves a statue in the equipment room, never mind he had to be fired for Nick Saban to come get the football things moving. I’d argue that DiNardo’s tireless efforts paved the way and, yes, I’m willing to die on that hill.

Still, it doesn’t have the be that bad. There is a better option. Hopefully somebody has counseled first-year coach Brian Kelly.

If the Tigers must wear purple jerseys — and apparently they’re intent on it — then please just don’t wear the gold (yellow) pants and helmets.

They stumbled onto another alternative a few years ago, probably by accident, and it kind of works.

It was so simple and effective you wonder why they never tried it before.

All you have to do to accommodate the purple jerseys, it turns out, is go all in and let the purple have its big day.

Listen closely: You just pair the purple with white pants and white helmets, and it’s not half bad.

It’s pretty aesthetic. Somehow the gold pants and helmets with the purple just looks dark and dull, like those trying days before hi-def TV.

When you brighten it up, top and bottom, it’s a really sleek look, suitable for formal and casual occasions alike. The Tigers have done it several times in recent years.

Here’s hoping that Kelly got the memo and dresses his troops accordingly.

Let him know that LSU fans don’t need reminders of the ’90s. 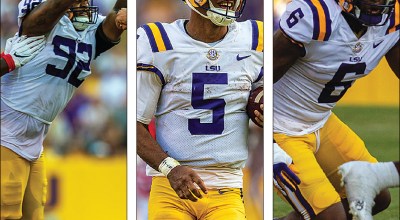 Accountability: It takes more than one leader or coach