2 of 3 candidates for Public Service Commissioner appear at forum 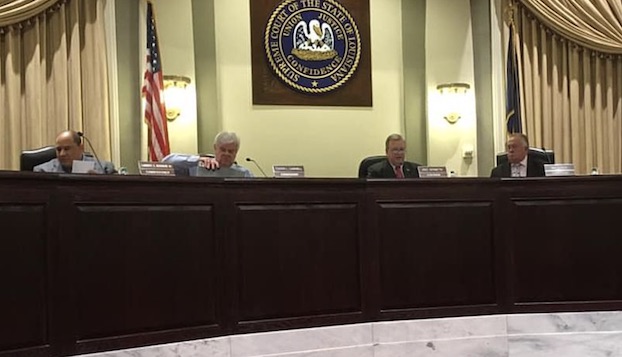 The Louisiana Public Service Commission. (Special to the American Press)

Living Word Christian Center and the African American Chamber of Commerce hosted a candidate forum for the Louisiana Public Service Commissioner’s race on Tuesday at The Dream Center.

Kevin Guidry, Port of Commissions assistant secretary treasurer for the Lake Charles Port, believes it is vital that Southwest Louisiana residents ensure they take the initiative to make informed votes in the upcoming midterm elections. “This is a very important time in our communities to come out and listen to these types of forums so that we can be informed and educated on the type of things that we need to have in our communities.”

Latour, who has more than 19 years of business experience in transportation, construction, and industrial engineering, said he has a track record of  “representing the people.”

Bodin said that his experience in the environmental fields of mediation and disposal will aid him as public service commissioner, as his position required him to interact with both public regulation and trucking companies.

He also said his intentions in running for public office is to accurately represent the people.

“I truly want to do this job only for the right reasons,” he said. “I have no party, and I’m not accepting a dime from anybody.”

When asked how he would use his platform to advocate for improved housing availability and affordability, Bodin said the most important change would be to ensure Southwest Louisiana homes are more energy efficient.

“The homes have to be more energy efficient so it can be more accessible for people to be able to afford their house and electric bill,” he said. “So, I’ll try to work with our policy makers to get more funding to help our lower-income housing be more affordable by helping seal the houses up.”

“Someone in this position has a lot of influence, a lot of connections, and a lot of relationships,” he said. “The biggest thing about working in public service is bringing communities together.”

Bodin said homeowners can reduce their electricity bills by ensuring their homes are properly sealed, as many houses sustained hurricane damage that they cannot see. “Though a home might not take a whole physical beating to the structure with the roof and everything gone, it’s still taking a beating which is making it less sealed, which can cause us to lose energy.”

Bodin also said consumers should not bear the weight of hurricane restoration charges, despite the U.S. Supreme Court maintaining that energy companies have the right to do so. He explained that public service commissioners can make legislative recommendations, but cannot solely enact legislative change.

“Until we can get the lawmakers to change that … we’re, unfortunately, going to be the ones that are biting the bullet,” he said. “I think they should cover at least 25 percent of what is considered storm-related charges.”

Latour agreed it is not moral for consumers to pay storm restoration charges, and said the most efficient way to eliminate or reduce the charges is to petition for legislative change.

“The biggest focus is building a group together to restructure securitization and pass resolutions for the vast majority,” he said. “Truth of the matter is the best thing that we can do is some form of cost-sharing, and that will be the main objective.”

Latour believes that energy competition is beneficial for consumers, and that despite deregulation failing in other states, such as Texas and California, it could be successful in Louisiana. He proposed “a type of hybrid deregulation” and in order to prevent utility monopolies.

Bodin is cautious of deregulation and cited the unfortunate economic repercussions that resulted from deregulation in other states. He believes that intense research is needed before taking decisive actions, and stated that “we need to get some very intelligent people from regulated and deregulated areas,” to ensure the right decision is made.

It is important to Bodin to maintain his loyalty to constituents, and plans to prove this by not financially aligning himself with any corporation. “I’d like to see folks that work in public commission be banned from taking any contributions from a company that they regulate in the state of Louisiana or the United States of Louisiana.”