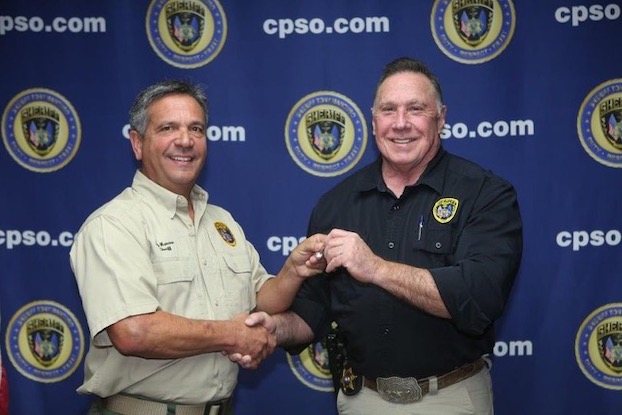 Calcasieu Sheriff Tony Mancuso presents Lt. Dan Herman with a commendation pin for his act of kindness. (Special to the American Press)

Lt. Dan Herman was honored recently with a commendation pin presented to him by Calcasieu Parish Sheriff Tony Mancuso to acknowledge the veteran police officer’s incredible work within the community.

In May, Herman made contact with an individual who was in need of a safe place to sleep one night. After learning of the person’s situation, Herman immediately acted and used his own money to pay for the person to have a hotel room.

It was an act of kindness Herman said he didn’t hesitate on in that moment — or in the past.

“I felt within my heart this person needed help, and I felt led to get them the hotel room. There have been many times I have done something to help someone, but I don’t like talking about it. I feel when you help someone, it is between God and the person being helped. I always think of it as it could be me, my children, or other family members. Sometimes, the smallest gesture of kindness could change someone’s life,” Herman said.

Herman has made a point to be a positive role model within the community since joining CPSO in 1997. Over the course of his career, he has strived to prove his dedication to protecting and serving citizens and in return, they have shown their own trust in him. This was evident in August when Herman was given information regarding a person stealing wire from telephone poles. Using that information, Herman was able to catch the suspect in the act, and that person’s arrest resulted in the solving of multiple open cases of wire thefts within the department and in Texas.

Herman said earning that level of trust from the community is incredibly important to him, and he considers it a reflection of his own integrity.

“I always think back to a saying, ‘Better is a poor man to walk in his integrity, than a rich man who is crooked in his ways’,” Herman said.

Serving the community and earning their trust is what Herman said makes him feel most fulfilled in his work, and he said he credits CPSO with supporting deputies as they strive to support the public.

“I became a police officer because I find the job to be rewarding, especially when you are able to help the community. I am lucky to work for a department such as the Calcasieu Parish Sheriff’s Office, where I work with dedicated coworkers throughout the entire department; all who have an immense amount of knowledge in their respective duties who I can always look to for advice. The sheriff has ensured CPSO has an abundant amount of resources, all of which are in place to help the members of our community,” Herman said.

Mancuso praised Herman’s work and dedication, describing him as a hardworking deputy who always puts the needs of others above his own.

“Lt. Herman is very deserving of any accolades he receives. He has been recognized time and time again by his fellow deputies and members of the community for going above and beyond his call of duty. His actions always demonstrate selflessness and commitment to our community. I am proud to say he works for the Calcasieu Parish Sheriff’s Office,” Mancuso said.