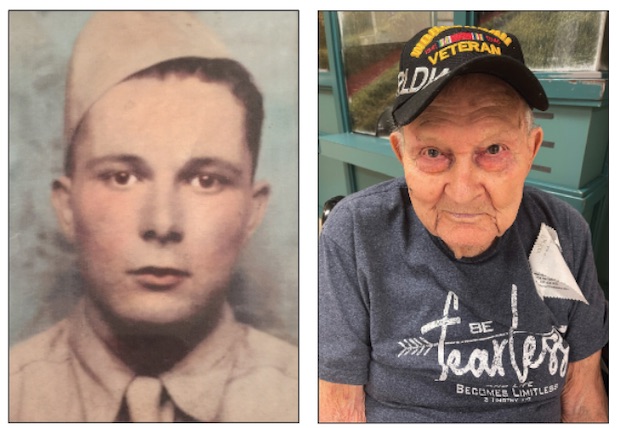 Willard Parker is a World War II veteran and Purple Heart recipient. He is a resident of the Southwest Louisiana Veterans Home in Jennings. (Special to the American Press)

Willard Parker, a World War II veteran and Purple Heart recipient, was drafted into the Army two weeks before his 18th birthday in 1942.

He did basic training then was shipped to England for further training for the war. He was a sharp shooter and machine gunner.

He was later shipped to France, where he was in the first wave of soldiers to hit the beach on D-Day.

The 29th infantry of which he was part of went in on Omaha Beach in Normandy, France, at 6 a.m. on D-Day, where he left the landing craft loaded down with TNT. His assignment was to take out German snipers in a concrete “pill box” that was shooting soldiers as they landed. They took the beach.

He later was sent to a little town to clear it of any German soldiers remaining. As they were clearing buildings and homes he heard a child crying. He found a 3- to 4-year-old little girl sitting by her deceased mother in a bedroom. After rescuing her, he took care of her for three days until they came to a Red Cross tent. He left her there for treatment and placement.

At some point he was sent to Saint-Lô, France. He was a machine gunner so he and his ammunition loader would always go ahead of the others to clear snipers out of trees. The two were hit with a mortar shell, which killed his buddy. Parker was hit and fell. He said he lay there from 8 in the morning until around 4 that afternoon when medics found him.

He had been discovered earlier that day by enemy troops who proceeded to kick and roll him to make sure he was dead. He said he held his breath until he passed out. He remained hospitalized for a while. Afterwards he was put in the replacement pool to continue fighting until the end of the war.

What sticks out to him most is the little girl, the streets of Paris being made of bricks, being shot, and the children holding little flags smiling and laughing while hollering,” Americana! Americana!” as they marched into Paris.