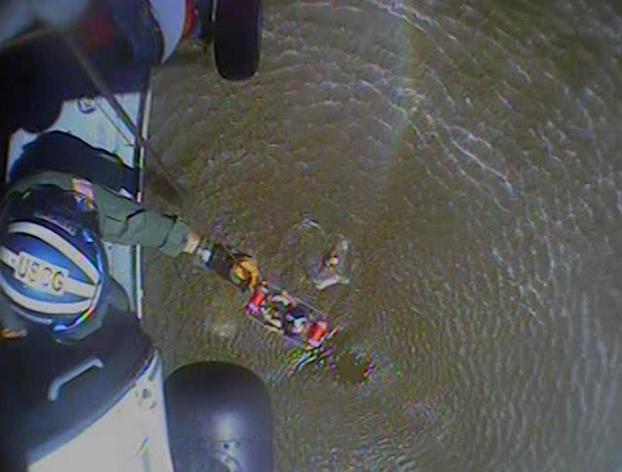 A Coast Guard Air Station New Orleans MH-60 Jayhawk aircrew rescues a boater from a capsized vessel near Slidell on Sunday. The boaters and their dog were safely rescued and transported to a nearby marina. (U.S. Coast Guard District 8)

The Coast Guard rescued two boaters and a dog from their capsized vessel Sunday near Slidell.

Coast Guard Sector New Orleans watchstanders were notified by dispatchers from the St. Bernard Police Department that a family member of one of the boaters received a distressed text requesting the Coast Guard on Lake Borgne. Watchstanders then coordinated the launch of a Coast Guard Air Station New Orleans MH-60 Jayhawk aircrew to assist.

The Jayhawk aircrew arrived on scene and observed an overturned 21-foot center console boat with two persons and one dog on the hull. The Jayhawk aircrew embarked one boater onto the helicopter, while the rescue swimmer stayed in the water until a Louisiana Department of Wildlife and Fisheries boatcrew arrived on scene and embarked the other person and the dog aboard their vessel. Both crews then transferred the two boaters and dog back to Hopedale Marina to awaiting emergency medical services personnel.

“With no other means of communication, the text was the only way we could have known the boaters were out there,” said Chief Warrant Officer Tricia Eldredge, a Sector New Orleans command duty officer. “The Coast Guard continues to urge the boating public to have proper communication equipment like VHF radios and locating devices such as emergency position-indicating radio beacons (EPIRBs) or subscription based satellite communication devices to broadcast one’s location in emergencies like this.”

Both boaters were last reported in stable condition.