Bucs pour it on Gators 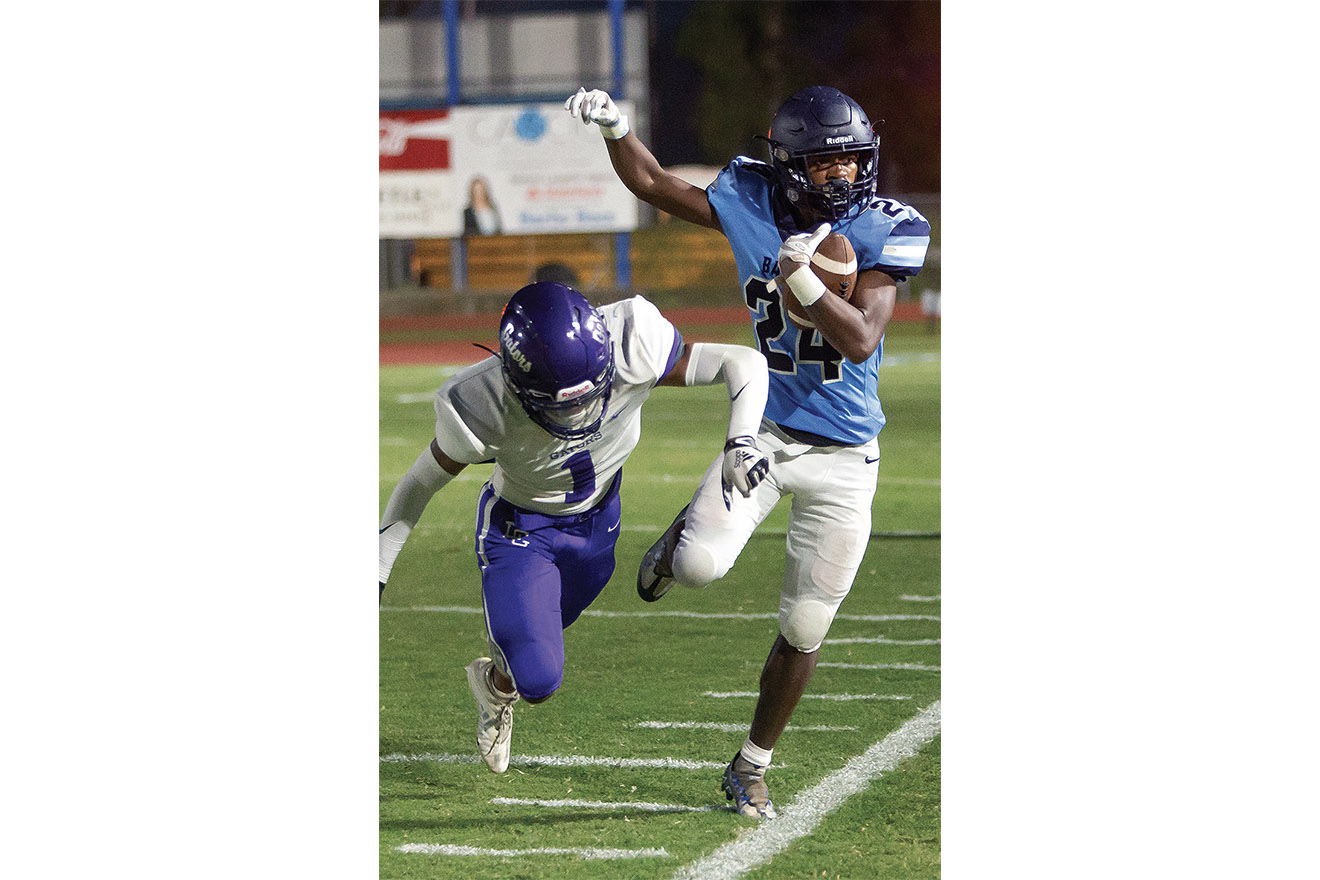 LaGrange’s Dedric LaSalle knocks the Bucs’ Eric Jones out of bounds after a reception during their season opener Friday night at the Barbe High School. Jones ran for 142 yards on nine carries and scored the game’s first two touchdowns on runs of 8 and 46 yards. (Rick Hickman / American Press)

Barbe blitzed LaGrange with five straight touchdowns in the first half to pull away in a 49-12 season-opening win.

LaGrange (0-1) was within 14-6 in the first quarter after Jason Wilson tossed a 7-yard touchdown pass to Omarion Randolph.

Barbe (1-0) returned the ensuing kickoff for a touchdown with Jamaal Levi going 80 yards for the score.

On the next play from scrimmage, Barbe fumbled into its own end zone with Barbe’s Michael Fulton recovering for a touchdown.

The Gators put together a drive into Barbe territory, but the drive stalled after a Barbe sack.

LaGrange recovered a fumble at the Barbe 15 on the ensuing drive, but fumbled into the Barbe end zone for a turnover.

Barbe converted the turnover into a score on a 35-yard touchdown reception by Levi. LaGrange muffed consecutive kickoffs, allowing the Bucs to score on a pair of 13-yard passes by Will McClain, the first to Landon Victorian, the second to Kenneth Golla, to take a 49-6 lead into halftime.

Barbe scored on its first two possessions of the game with Eric Jones scoring on runs of 8 and 46 yards.

Wilson and Randolph connected again for the lone second-half score, an 11-yard touchdown in the fourth quarter.

Barbe head coach Mike Cutrera said he was pleased with his team’s approach and execution.

“I like the way we came out and played,” he said. “I think the kids were ready to play. They practiced hard all week and it carried over into the game. There are some things we need to fix and work on next week, but the effort is there and we can’t fault them for that.”

Cutrera was glad to see the Bucs have a big night in offense despite only a few touches for Levi, who had more than 1,800 receiving yards last season.

“Jamaal is going to open things up for other guys,” he said. “We have some guys who can make plays. The offensive line is doing their job and Will is running the offense the way he should.”

Cutrera said his team has a good approach to the game.

“I like the way the kids care for one another,” he said. “They compete in practice and that carries over to the game.”