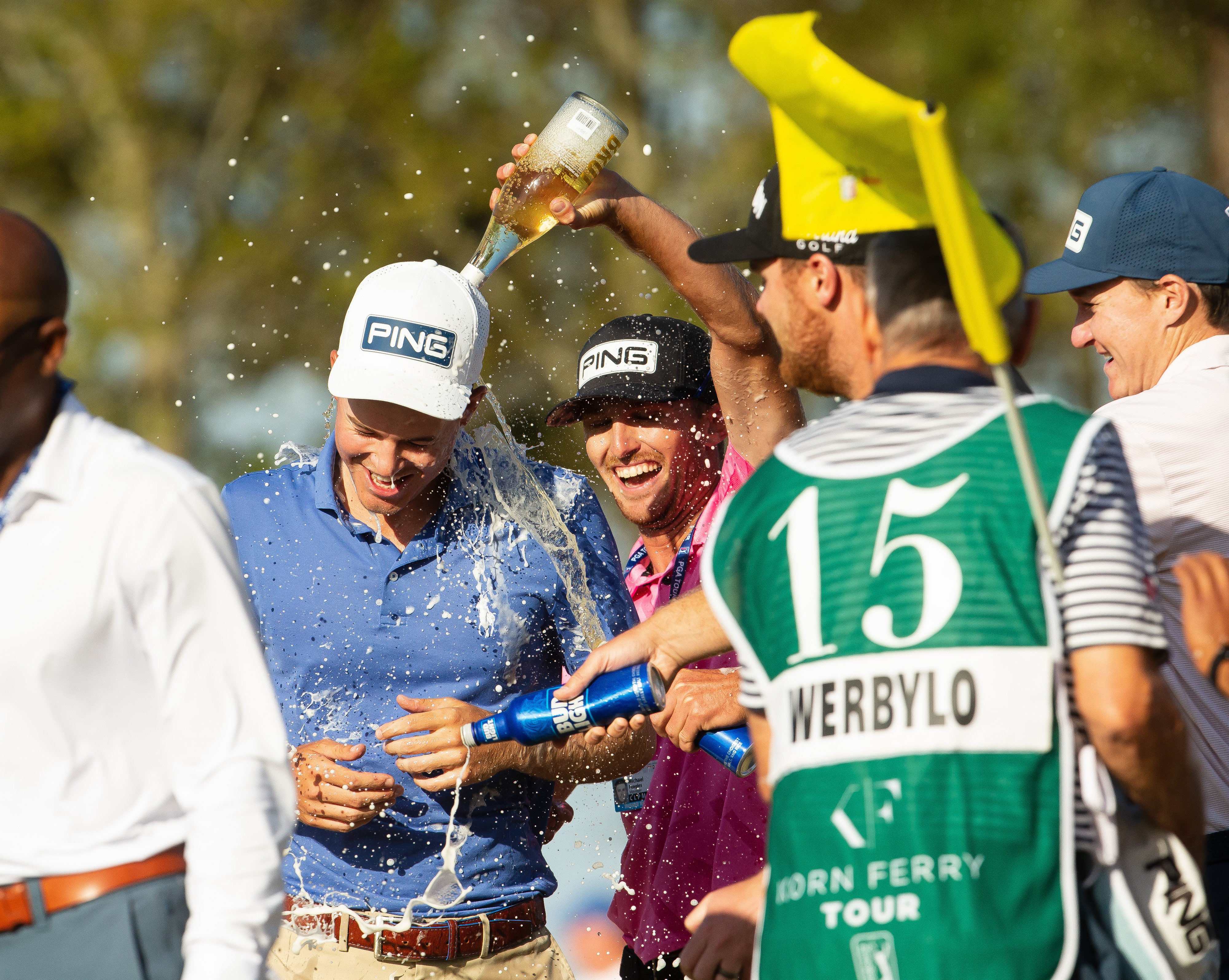 Trevor Werbylo celebrates after his victory at the Korn Ferry Tour Lake Charles Championship at The Country Club at Golden Nugget on the third playoff hole on Sunday. (Rick Hickman / American Press)

After only one year of professional golf competition, the PGA Tour notified the Host Organization, the Tournament Facilities Organization, and Visit Lake Charles of its intention to exercise a clause in the contract which allows them to cancel the tournament if a title sponsor is not secured.

“Words cannot adequately explain the shock and disappointment of this announcement,” said Visit Lake Charles CEO Kyle Edmiston.  “The inaugural event was scheduled for 2020, but the PGA Tour canceled that tournament in March due to the spread of Covid-19.  Since then, we have overcome two massive hurricanes, a freeze of epic proportions, and a 100-year flood, but we persevered and put on an outstanding inaugural event in March 2022. I believed that all four partners were committed to a three-year cycle to get the tournament on financial footing, but I was obviously mistaken.”

Since the completion of play on March 27, the Lake Charles Championship staff has added over 15 new sponsorships at varying levels while renewing all sponsors from the 2022 event. Just this week, Sterling Neblett, Citgo vice president and general manager of the Lake Charles Manufacturing Complex, renewed their support for the 2023 event, which is the pathway to the PGA.

“I am well aware of the challenges that the PGA Tour is now facing with player defections to LIV Golf, and the need to increase tournament purses and guaranteed money,” Edmiston said. “Visit Lake Charles offered to move from presenting sponsor to title sponsor, but the PGA declined the offer. I didn’t realize that the 26 PGA Korn Ferry tournament spots were now being freely bid to whomever was willing to pay the most money. The Southwest Louisiana community, despite all the many setbacks, has been a stalwart partner in this process, and we definitely feel that this move is unjustified.”

During the inaugural tournament, the Lake Area welcomed more than 150 golfers from all around the world including Australia, Mexico, Japan, Canada, Korea, UK, and India. The champion of the tournament, Trevor Werbylo, currently plays on the PGA Tour, and the Southwest Louisiana community was able to cheer him on and celebrate the launch of his professional career.

“We believe that Southwest Louisiana was the perfect location to see this tournament thrive for years to come with the outpouring of support and enthusiasm from the community. Both gaming resorts were integral partners, creating an upscale, first-class atmosphere for the tournament which was enjoyed by both competitors and spectators alike. The partnership from the resorts truly showcased Southwest Louisiana as a most desirable golf destination. In addition, Visit Lake Charles appreciates the can-do spirit of the residents who embraced this tournament and welcomed visitors from all over the world,” said Edmiston.