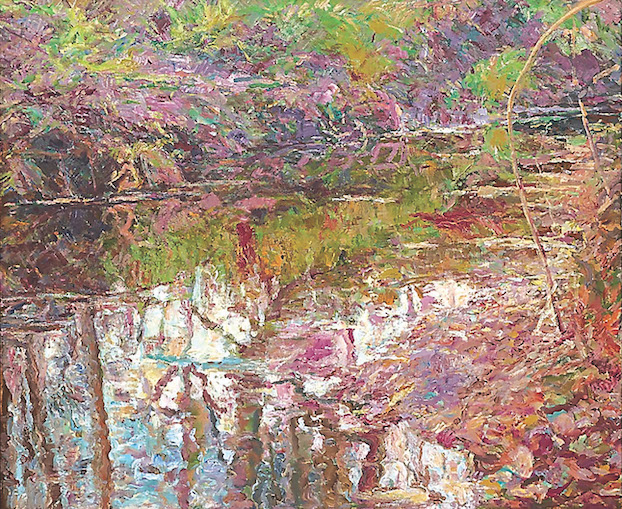 “Creek Series No. 4” by Foad Satterfield is now hanging in the Malin Gallery.

Painter Foad Satterfield grew up in Lake Charles. Not all his memories of that time are great. However, everything that’s ever happened to the 73-year-old, including growing up Jim Crow in the deep south,  serving in Vietnam and studying with well-known spiritual gurus, has made him who he is today — a man committed to contemplation and ameliorating suffering.  “When I ask myself how I can do this, and I ask myself this question often, the answer I always get, so far, has always been the same,” he said. “Go to your studio and make the most influential, energized and beautiful paintings you possibly can.”

If that sounds presumptuous, he gets it.

“Whether viewing a painting is successful in this or not, I don’t know. I just ask that they bring their eyes,” he said.

Sixteen of Satterfield’s paintings are on display at Malin Gallery in New York City through Sept 10. Some of these “dynamic yet contemplative landscapes pushed to the edge of abstraction” were inspired by the life of Albert Woodfox, an Angola prisoner who served over 41 years in solitary confinement, the longest any person has served in solitary confinement – and it was to serve a sentence for a murder he didn’t comment.

Satterfield now lives in California. Before he moved to Lake Charles in the mid ’50s, he lived in Orange, Texas.

“I didn’t know about segregation because my life was a hermetically sealed environment. Nothing challenged my humanity,” he said.

He explored the woods and saw beauty in patterns, color, shapes, lines and planes. He created things. At the age of 7, he cut out and sewed his own shirt. His creative development allowed him to be truly free.

“At the age of 9, I moved to Lake Charles and everything came crashing down,” he said.

He was small for his age and admittedly sensitive.

“From my perspective the kids in Lake Charles just looked big and rough,” he said. “I was glad Second Ward School was only two blocks away from home.”

He sensed the new world around him and quickly made adjustments. He introduced himself. He made a friend.

“Even at that age, I knew I needed a group,” he said. “I needed community.”

Then Foad won first place for his artwork submitted for a “Don’t Be a Litterbug” promotion among area schools. When the judges found out he was from a colored school, Satterfield said the first place prize was taken away from him, and he was given third.

“I wasn’t  hurt and didn’t really understand what was going on because I had no context for it,” he said. “But my mother was traumatized.

To add insult to injury, the winning contestants were invited to KPLC to introduce the winners in an afternoon program. They didn’t call me up and told my mother they ran out of time.”

He fondly recalled the variety of entertainment available on Enterprise Boulevard when he was a young teen, particularly Evelyn’s Lounge.

“It was a classy place,” he said. “No nonsense was tolerated. You had to be on your game.”

The rule at the time, according to Satterfield, is that it wasn’t absolutely necessary to be 21 to enter an establishment.

The way a person looked and conducted himself signaled maturity. He was a young teen, but a well-tailored young teen.  It wasn’t long before he was helping his friends achieve the same well-tailored style.

While still in high school he asked his parents if he could go to New York to study fashion design. Without their blessing, he took the more traditional route, and earned an MFA from Louisiana State University.

“I always knew I’d be in the creative world,” he said. “I just didn’t know what capacity.”

Rather than letting experiences in Lake Charles, and later in Vietnam, become a weight, he saw majesty, discovered connections and learned from people around him, young and old.

“One of my Lake Charles High School teachers used to say, having a vision is worth 10 academic degrees,” he said, “I remember that.”

During his travels abroad, his birth name, Floyd, presented some pronunciation problems and someone suggested Foad. 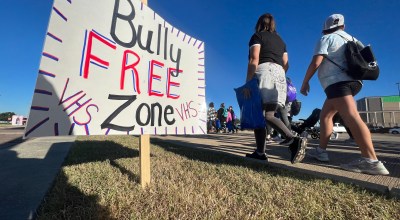 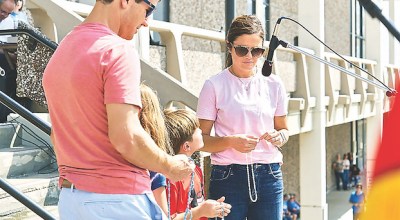 Rosary Around the Lake to be recited in three languages 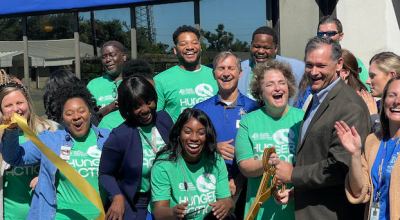